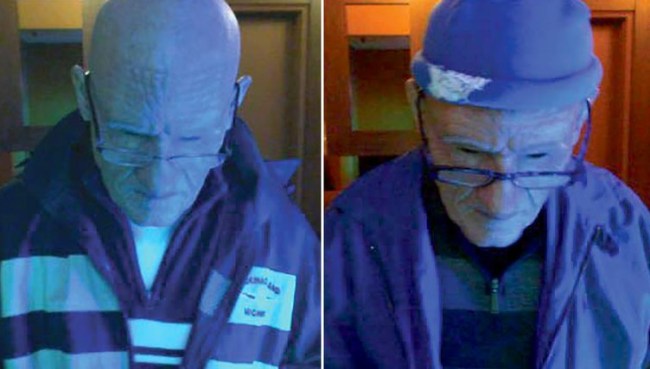 US District Court for the Eastern District of Michigan

A 55-year-old man from Michigan, John Colletti, is accused of stealing more than $100,000 from gamblers at two casinos by doing his best Johnny Knoxville as Bad Grandpa impression, wearing a very realistic prosthetic mask that made him look like an old man.

Colletti is also accused of using a walker, counterfeit driver’s licenses, and personal information obtained on the internet as part of his scam.

Colletti, 55, allegedly targeted his victims by illegally obtaining their personal information and then using counterfeit driver’s licenses to withdraw funds from their personal bank accounts via self-service kiosks at the casinos, according to a federal criminal complaint unsealed in federal court in Michigan Thursday.

The kiosks, operated by Global Payments Gaming Services, are used by the casino industry for bill-breaking, jackpot processing, cash withdrawals, cash advances, and ticket exchanges, among other services, according to the complaint.

The kiosks require users to insert their driver’s license and the last four digits of both their Social Security number and phone number before checking account funds can be withdrawn. Each victim had previously enrolled to have their bank accounts linked to their profile in Global Payments’ “VIP Preferred Program,” the complaint said.

Colletti was arrested in Kansas after authorities viewed surveillance footage that showed someone wearing a full prosthetic face mask to resemble an old man.

The New York Post reports the complaint against Colletti says he “immediately went to the restroom, where he removed his disguise. Colletti then exited the casino with a noticeable bulge down the front of his pants, believed to be the prosthetic face mask.”

Colletti’s walker, two Michigan driver’s licenses, a car key, and around half the money he stole that day ($11,000) were found in the rest room by police, along with sticky notes with the Social Security and phone numbers of each gambler placed on the back of each license.

Inside Colletti’s rental car were four masks, flash drives, “books on how to get away with committing crime,” identification cards and kiosk receipts, according to the complaint. Police found the prosthetic mask the next day near the casino, the complaint said.

Background checks on various individuals, tutorials and manuals on how to counterfeit money and commit various other financial crimes, videos of GPKs inside the MGM Grand Casino Detroit, handwritten signatures, and excel spreadsheets with over one thousand names, along with each person’s date of birth, Social Security numbers, bank routing and account numbers, and monthly salary, were found on the flash drives.

Colletti, currently in the custody of US Marshals in Kansas, faces charges of wire fraud, aggravated identity theft, and fraud and related activity in connection with access devices.

If only he had channeled all of that time and effort into doing something positive, huh?