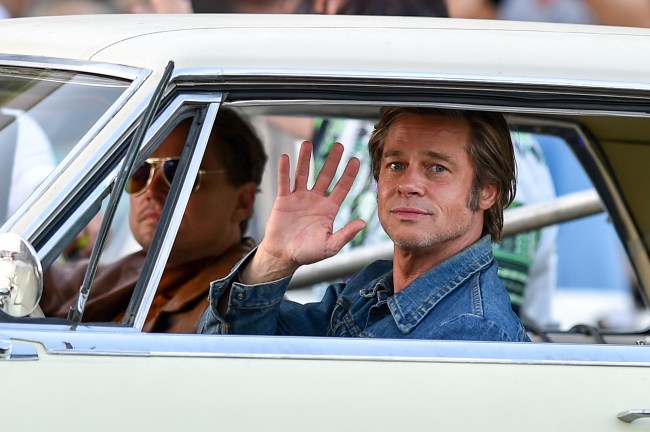 My pants get a bit tighter every time I think of Quentin Tarantino’s latest film slated to hit theaters on July 26, 2019. The film, titled Once Upon A Time in Hollywood, will be Tarantino’s first since the 2015 American Western The Hateful Eight and will chronicle the “Helter Skelter” murders by the Manson Family in 1969.

Once Upon A Time in Hollywood stars Brad Pitt and Leonardo DiCaprio, who will play two friends striving for fame in Los Angeles in 1969. DiCaprio will play Rick Dalton, an ex-star of a western TV show and Pitt will take on the role of his longtime stunt double, Cliff Booth.

[Related: LA Transported Back To 1969 For ‘Once Upon A Time in Hollywood,’ DiCaprio And Pitt Are Old School Cool]

By far and away Tarantino’s most impressive cast in his nine-movie career (mind you, Tarantino once claimed he was going to retire after his tenth film).

The first official trailer for the movie is going to be released this week, but Leonardo DiCaprio teased the public with the official movie poster.

I should never have expected a movie poster to blow my dick off, but I was certainly reasonable in expecting more than this:

I’m glad to see I wasn’t the only one disappointed by film art that looks like it was made by a Sony Pictures intern.

Re: the new Once Upon a Time in Hollywood poster…

My bet is that they’re gonna release a number of ‘character’ posters. Doesn’t change the fact that it’s simply rather boring. pic.twitter.com/tvm8VNgeyt

thanks, QT, but we're going to take this in a different direction pic.twitter.com/cCkdv2Nk3T

Once Upon a Time in Hollywood poster:

whoever made the once upon a time in hollywood poster is a master scam artist and i must pay my respects to her. reveal yourself queen

Rest assured, this does not quell my excitement for the movie, and it shouldn’t squash yours either.