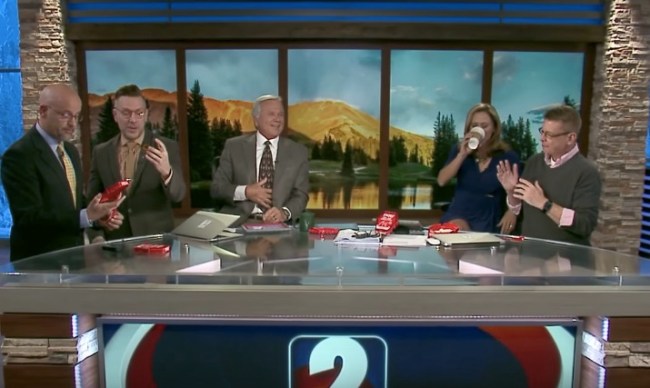 Denver’s Channel 2 morning news team took the #OneChipChallenge on-air, with five of the morning news anchors eating a single Carolina Reaper Pepper chip. I’ve never seen five people take the Carolina Reaper One Chip Challenge at once and I must admit that it was pretty fascinating to watch the varying degrees with which they were able to withstand the heat.

I’m sure by now most of you bros are familiar with the One Chip Challenge. If you aren’t familiar, the One Chip Challenge involves eating a single Carolina Reaper Pepper chip from Paqui. You can purchase these individually packaged chips on Paqui’s website for $4.79/box. This idea here is to test your ability to withstand the might Carolina Reaper Pepper’s heat without having to eat a pepper itself.

I haven’t taken this challenge myself yet but that’s entirely due to laziness. I just haven’t gotten around to ordering these chips yet. When it comes to the Carolina Reaper Pepper I’m actually pretty fascinated, and it’s only a matter of time before I chow down on one of these chips myself.

The difference between me eventually getting around to this challenge and what we see above is I won’t be foolish enough to live stream myself on the morning news while I writhe around in pain. I might film my agony and put it up on the BroBible Instagram, but I’m not trying to broadcast my life unraveling for my entire city to see on the 8am news.