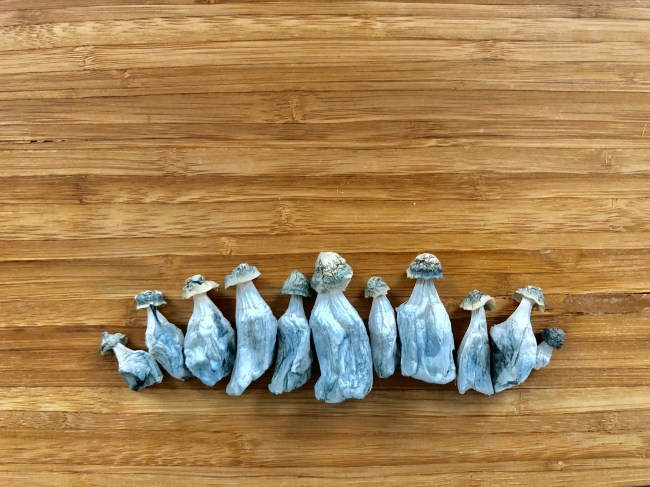 When the unenlightened think of psychedelic mushrooms, they probably think of some stinky Woodstock burnout with impossibly tangled dreads and those obnoxious plug earrings. These people have hijacked the magic mushroom movement, negatively stigmatizing it’s transcendent powers so as to stifle progress of its widespread introduction into society. To hell with them.

But there are many prolific public figures who have cut through those dreads to discover the deeper value of psilocybin—from neuroscientist and philosopher Sam Harris to Silicon Valley tech mogul Peter Thiel, who in 2018 powered a Compass Pathways study to determine how psychedelic drugs could be used to treat depression.

The state of Oregon could be the first state in the Union to ease mushrooms into the public consciousness, as an Oregon ballot to legalize the use of psilocybin in therapeutic settings has amassed enough signatures to appear on the November ballot, Oregon Live reports.

According to IP 34’s website, “it is uniquely effective in treating depression, end-of-life anxiety, and addiction. A recent study from NYU showed that psilocybin therapy reduced depression and anxiety with cancer patients with 80 percent of patients, with few side effects.”

“Oregon has some of the highest rates of depression, anxiety, and addiction in the country,” Sheri Eckert said in the release.

“I also know that the options we have to help those people are just not enough,” she added.

“I support this initiative as a doctor who believes that therapies should be backed by research and evidence-based, and psilocybin is a compound that has a demonstrated safety record,” said Dr. Rachel Knox, who joined the Eckerts online during the press conference.

While places like Denver, Oakland, and Santa Cruz have decriminalized the substance, if Initiative Petition #34 passes, Oregon would become the first state to legalize psychedelic mushrooms, currently categorized as a Schedule 1 narcotic by the DEA. Oregon would require patients go through a “three-step therapy process” before treatment and would restrict use to licensed therapy centers.

Sign me up for tripping balls on the Oregon coast.