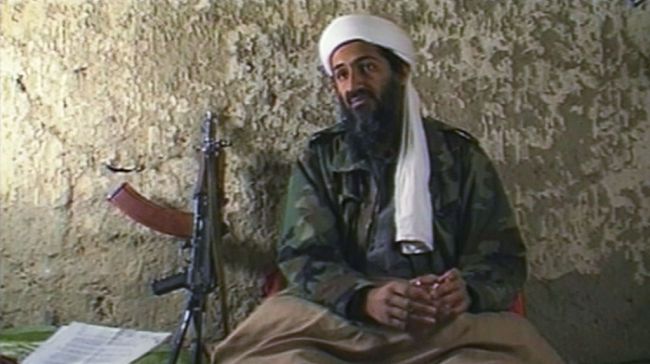 A new documentary about Osama bin Laden will be released this week. It will focus on the hard drive of the infamous terrorist guerrilla, most notably the “fairly extensive” collection of adult movies that were discovered at his compound during the infamous raid on May 2, 2011.

In November 2017, the CIA released nearly 470,000 files recovered from the 2011 raid on bin Laden’s compound. Included in the files were dowwnloaded American animated children’s movies such as Antz, Cars, Chicken Little, Tom & Jerry, and Ice Age: Dawn of the Dinosaurs. There was also found American films, including Batman Gotham Knight, Resident Evil, and The Three Musketeers.

There was also anime found in the files, including the entire Devil May Cry series, Street Fighter 4: The Ties That Bind, and Storm Rider – Clash of the Evils.

Not weird enough yet? OBL also had the viral video “Charlie Bit Me,” a photo of Whitney Houston (Who he allegedly wanted to marry), and old arcade video games with scantily-clad women on the covers, such as one titled Perestroika Girls.

Osama bin Laden thought that using sex videos would come in handy…in such a way as to secretly share decoded messages. Would that mean that terror cells would have to read between the legs to decode the messages?

According to the cheeky double-entendre titled Bin Laden’s Hard Drive documentary, the al Qaeda leader wasn’t spanking it to his immense sex video collection, but rather the X-rated content was used to dispense terrorist commands. This is the equivalent of: “I read Playboy for the articles.”

“According to his letters, bin Laden feared using email as a means of spreading his message, because encryption couldn’t be trusted; this is why most of his interaction with the outside world occurred via couriers,” The Daily Beast said. “However, the idea is raised by Bergen’s show that the al Qaeda bigwig might have been hiding encrypting instructions in his adult files—a devious means of avoiding detection by marrying murderous commands to the very sort of sinful content he purportedly decried.”

Every guy right now to his girlfriend: “My browser history isn’t what it appears to be, I actually use those adult sites to send important coded messages…you know like Osama bin Laden did.”

On the one hand, OBL may have been using adult movies to order terrorist attacks. On the other hand, OBL might have just loved adult movies, and who are we to judge? Forensic psychologist and CIA consultant Reid Meloy believes that the al Qaeda founder probably wanted to use the content for his personal use during some “Me Time.” An unconfirmed accusation that likely rubs OBL followers the wrong way.

In 2015, BroBible filed a Freedom of Information Act request to uncover exactly what kind of adult-themed “materials Osama bin Laden had in his possession at the time of his death” at his compound in Abbottabad. The CIA responded to BroBible’s FOIA by saying that “should they exist, would be contained in the operational files.”

“The CIA Information Act, 50 U.S.C 431, as amended, exempts CIA operational files from search, review, publication, and disclosure requirements of the FOIA,” the letter from the Central Intelligence Agency read. “To the extent that this material exists, the CIA would be prohibited by 18 USC Section 1461 from mailing obscene matter.”

According to Cornell Law School, “operational files” are defined as:

(2)files of the Directorate for Science and Technology which document the means by which foreign intelligence or counterintelligence is collected through scientific and technical systems; and

(3)files of the Office of Personnel Security which document investigations conducted to determine the suitability of potential foreign intelligence or counterintelligence sources;
except that files which are the sole repository of disseminated intelligence are not operational files.

But Jeffrey Anchukaitis, former spokesperson for the Office of Director of National Intelligence (ODNI), told the Guardian in May 2015: “We are not going to release these materials due to the nature of their contents.”

So the world may never know what kind of kink OBL was in to.

The Bin Laden’s Hard Drive documentary will examine the hundreds of thousands of digital files and 250 gigabytes of data that were confiscated from the al Qaeda founder’s compound. CIA profilers, criminal psychologists, religious scholars, and military experts will analyze bin Laden’s home videos, photos, audio files, GIFs, personal documents, and downloads, according to Deadline. The documentary hopes that the research will help understand what made Osama bin Laden into the murderous leader behind the September 11th terror attacks.