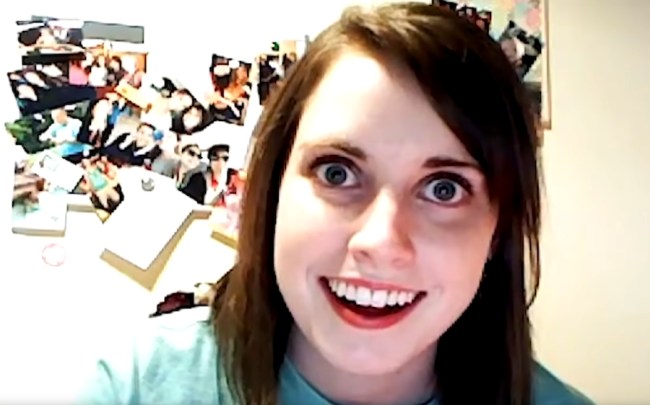 Remember the Overly Attached Girlfriend? The meme is hard to forget.

Her real name is Laina Morris, and back in 2012, she became famous after submitting a video for a Justin Beiber parody contest.

“I had no idea how profoundly this would affect my life,” Morris recently told BuzzFeed when they caught up with her for their “I Accidentally Became A Meme” series.

The story goes that Beiber was hosting a contest for parody videos for his song “Boyfriend.” He asked fans to write a song from the girlfriend’s perspective.

Morris got to writing immediately.

“I was a Justin Beiber fan, but keep in mind, I was 20 years old and Justin Beiber was a teenager,” laughs Morris. “I wasn’t really obsessed with him, I think it was just kinda fun, silly music that I enjoyed.”

“I was on my fourth take of this song and I realized there’s this really long instrumental period at the beginning of the song where I was just sitting there not doing anything so I just sort of decided to stare straight into my webcam and make the creepiest face I could make,” Morris told BuzzFeed.

She shared the final video on her Facebook page and went to bed. She woke up the next morning and her roommate broke the news that she was suddenly an internet celeb.

“My face was everywhere.”

For the first year, things were going great, but eventually, Morris found herself in therapy to handle the pressure of being a “YouTube star” and meme.

Here is Morris’s tale in her own words – from the super highs to the lowest lows.