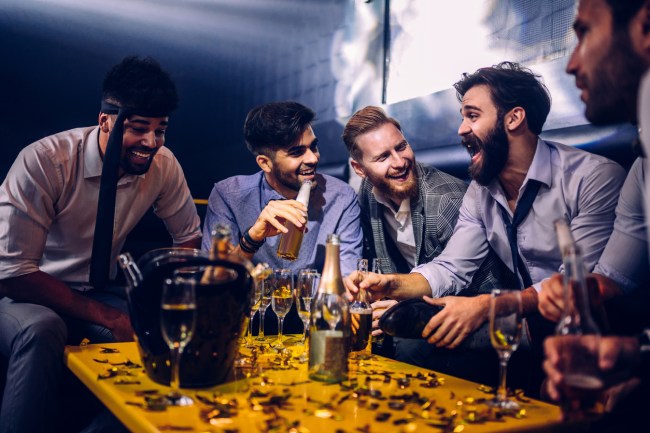 Women typically aren’t super jazzed when their husbands or boyfriends get invited to a bachelor party. Whether it is the heavy drinking, the strip clubs, the potential to cheat or all three, overprotective wives and overly attached girlfriends cringe at the thought of their man going to a bachelor party. One jealous wife attempted to put a kibosh on her husband attending a bachelor party by demanding that he agree to a crazy list on overbearing rules before he was even allowed to go to the stag party.

The list starts out as pretty reasonable — no illegal drugs. That’s a fair request. The second rules says “no cigarettes,” which is again a sensible plea since her husband quit and she doesn’t want him to fall off the wagon.

The third demand says that her husband can’t drink because “alcohol leads to bad decisions.” Yeah, that’s kinda the point. Then the wife makes it known that the bachelor party is not allowed to have any strippers or dancers because the men are married. They’re married, not dead.

This buzzkill tells her husband that they can’t rent fast cars and they’re only allowed to take taxis. What is this nonsense?

Then she goes into complete NSA mode by saying that “phones need to be tracked at all times.” That’s when the guys need to drop their phones off at the local Applebee’s while they go out and drive fast cars to strip clubs.

No swearing? Is this your mom or your wife? It’s a bachelor party not Sunday mass.

The next rule is “no hurting each other (including play wrestling).” Again, this woman wants to be her husband’s mom not his wife. The last commandment on the list is no gambling. This guy is gambling with his future if he stays married to this wet blanket.

After receiving feedback from her Facebook friends and family, the wife finally came to the conclusion that she “can’t control him once he leaves the house” and she “can’t control his friends.” So she completely barred him from even going to the bachelor party. Dude, run, don’t walk, run away from this miserable, joyless, untrusting relationship!