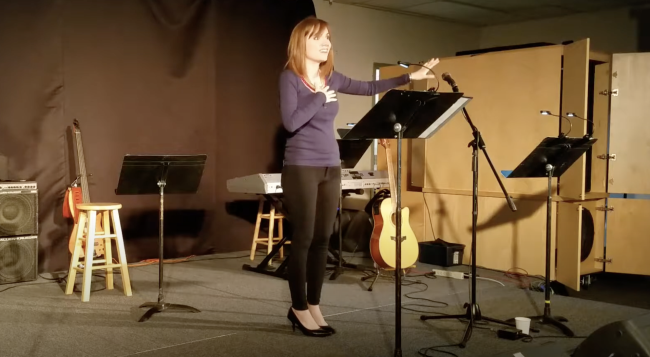 Nikole Mitchell grew up in a Baptist household that expected her to play into the strict gender roles of religion. While those around her taught her that women belong in the kitchen and with the children, she always fantasized about being a stripper. Now, at 36 years old, she has made that dream a reality.

The word of the scripture told her that her sexual desires were innately sinful and she was indoctrinated to believe that as truth growing up. Thus, she leaned fully into faith and became a pastor because of her love of performing. 1 Timothy 2:12 is often used to keep women out of leadership positions in church and suppresses them from teaching theology, so even her pastoral role was considered rebellious.

“I do not permit a woman to teach or to assume authority over a man,” it reads. “She must be quiet.”

As Mitchell began to preach her teachings, she found that when she looked within the verse’s historical and cultural context, the restriction of women was due to specific cultural problems that no longer apply to women today. In 2011, she and her now ex-husband (with whom she has three children) joined the Woodland Hills Church. While with evangelist megachurch in St. Paul Minnesota, she had her eyes opened to the possibility of gender equality within the faith. Mitchell’s sermons often delivered messages of inspiration for women, encouraging them in pursuit of their passions within the church and beyond.

She took a weekly pastor position with Woodland Hills in 2016 but soon discovered her true being later that year when she attended an LGBT-oriented theater performance. Mitchell, who now identifies as a bisexual and pansexual, felt like she was living a life of deceit upon returning to the church and struggled to keep her sexuality a secret.

After giving her first big weekend sermon in July of 2017, she left the church for good. Mitchell never showed up again and came out publicly via a YouTube video a few months later.

Tasked with rebuilding her life anew, she dove deeper into her passions and took a class called ‘Sexpress You,’ focused on expressing oneself sexually. Mitchell booked her first nude photoshoot shortly thereafter and never looked back.

The now 36-year-old moved to Los Angeles in August 2019 and divorced her husband in June. She describes herself as a “pastor-turned-stripper/life coach/model” on her instagram page (with almost 130,000 followers), works as a life coach teaching courses such as ‘How to Unf–k Yourself,’ and makes most of her money through a $15 a monthly subscription-based OnlyFans account and Zoom sessions.

As she enters her fourth full year at her new career, Mitchell is making nearly $100,000 a month, which exceeds her yearly salary from her previous career. Mitchell went from charging $50 an hour for shoots to $800 an hour. She says she is happier than ever and making over 1,000,000 a year, she should be.