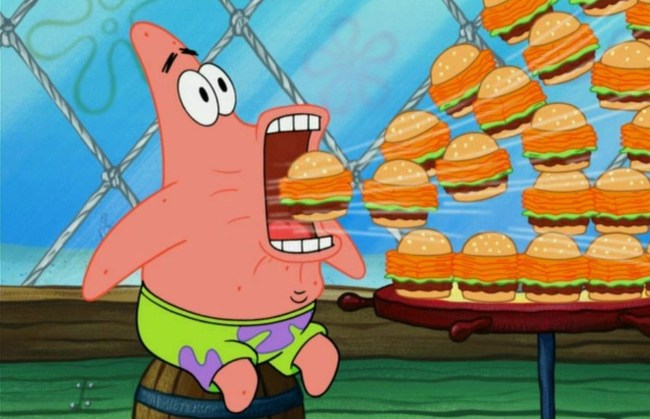 I fear it may be time to pull the plug on our collective simulation. You’ve won, evil robot empire: my spirit is officially broken. According to reports from Deadline, a Patrick Star spin-off is coming to Nickelodeon.

SpongeBob‘s partner in crime is getting his own show. I have learned that Nickelodeon is finalizing deals for The Patrick Star Show, a SpongeBob SquarePants animated spinoff centered on SpongeBob’s best friend Patrick Star, voiced by Bill Fagerbakke.

I hear voiceover recordings already have started for the project, which is expected to receive a 13-episode order and comes from the creative team behind the mothership series.

According to sources, The Patrick Star Show is in the vein of The Larry Sanders Show and Comedy Bang! Bang!, with Patrick (Fagerbakke) hosting his own late-night talk show. I hear the series would revolve around Patrick and his family. Fagerbakke is being joined by a largely new cast voicing new characters, with SpongeBob cast members expected to make occasional appearances, reprising their roles. [via Deadline]

First, I have a confession to make: I’ve always thought Spongebob was sort of overrated. Don’t get me wrong, I obviously crushed many-a-hour of Spongebob back in my day, but even then, when I was in elementary school — many, many moons ago — I was a staunch member of #TeamFairlyOddParents over #TeamSpongeBob. Credit to SpongeBob SquarePants, though, because while The Fairly Odd Parents went off the air in 2017, SpongeBob continues to chug along, as it’s now in its 21st (!!!) year.

Given the series’ rampant success, it should come as no surprise that, after two-plus decades, Nickelodeon is finally deciding to give the most popular supporting character his own spin-off series. But for someone like myself who’s been quietly rooting for the demise of that ear-piercingly-annoying porous yellow piece of shit for the better portion of my existence, this Patrick Star spin-off is but another sign that SpongeBob won’t be going anywhere anytime soon.