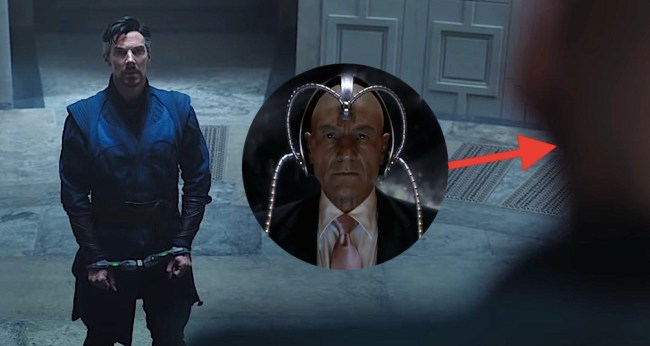 One of the biggest moments of Super Bowl Sunday for movie fans didn’t happen during the big game as Marvel Studios dropped the trailer for Doctor Strange in the Multiverse of Madness right before kick-off, giving MCU fans a new look at the upcoming Phase 4 film.

While the entire trailer makes the film seem like one of the craziest Marvel Cinematic Universe films to date, the highlight was undoubtedly an apparent appearance from Patrick Stewart’s iconic Professor X, whose voice was teased about midway through the trailer. Many MCU fans expect Stewart’s Professor X to be a part of Marvel’s Illuminati, which is effectively a secret society of Marvel’s smartest and most powerful heroes who pull the strings behind the scenes. Obviously, given that Professor X looks set to factor into the film, this could be how the Marvel Cinematic Universe introduces the X-Men into the fold.

“We should tell him the truth,” Stewart’s Professor X can be heard saying.

Patrick Stewart’s Professor X confirmed to appear in ‘#DoctorStrange in the Multiverse of Madness’ pic.twitter.com/MkeARYP6Va

Given the appearance of Professor X, MCU fans are also expecting the appearance of other iconic Marvel characters, with potential options including Mister Fantastic, an alternate universe version of Iron Man, Black Panther, Black Bolt, and Namor (who’s rumored to be the antagonist is Black Panther: Wakanda Forever), who are all key members of The Illuminati in the comics. There’s even been some speculation that Deadpool could appear.

damn they got my boy goin’ THROUGH IT in this one #DoctorStrange pic.twitter.com/vMZrah8rRp