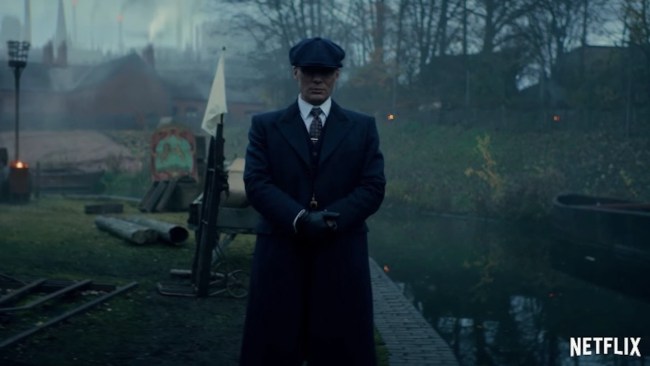 While Peaky Blinders has already premiered across the pond in the United Kingdom, Netflix has been curiously mum about the beloved period drama, despite being just weeks away from its stateside release.

Season five of Peaky Blinders sees the entire main cast return, with the introduction of Sam Claflin’s Oswald Mosley — a real-life politician who was the leader of the British Union of Fascists — as the primary antagonist of Tommy, Arthur, and the rest of the Shelby crew.

The fifth season of the acclaimed Stephen Knight gangster period drama — which is set to kick off with the Wall Street crash of 1929 — will consist of six episodes.

Here’s the official synopsis for the fifth season of Peaky Blinders, via Netflix:

“As the Shelbys grapple with the 1929 stock market crash, Tommy confronts new threats to his power from younger family members and fascist rivals.“

Series creator Stephen Knight certainly hasn’t been shy about his feelings on the fifth season, as he told the crowd at the London premiere in August that the season will be filled with “shocks and surprises” and promises that the show “gets better and better”, as he already has plans for the sixth and seventh seasons.

“It’s an absolute miracle that we’ve got this fantastic cast, who just come back time after time and just deliver this thing, and just make it more than the sum of its parts. Helen, Paul, Cillian, Sam and Sophie – and all of them. You can go all the way through. It’s not like there’s weakness there.

Knight has previously revealed that he wants to write seven series in total, with series five, six and seven still to come. [Radio Times]

Peaky Blinders premiered in the United Kingdom on Sunday, August 25, and will hit Netflix in the United States on Friday, October 4.