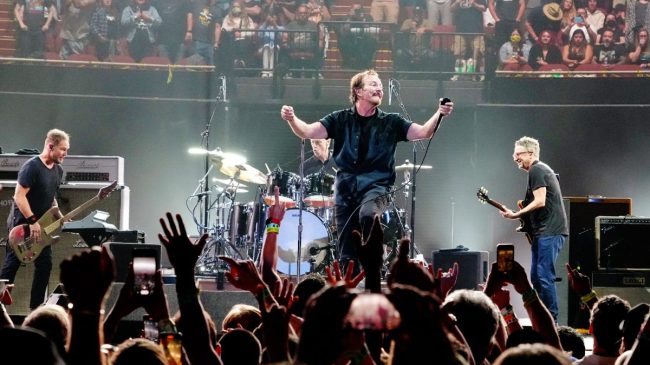 Pearl Jam was in California over the weekend as they continued a US tour to promote some of their new music.

The band was unfortunately hit with some tough news ahead of their most recent show in Oakland. Drummer Matt Cameron got COVID before the concert, leaving the group with no one on the sticks.

Rather than cancel the show, though, Pearl Jam came up with the best possible solution.

They got Kai Neukermans, a local high schooler, to fill in for Cameron on stage. The youngster was actually scouted out by lead singer Eddie Vedder’s daughter, Olivia, who found Neukermans on YouTube. He plays in a band called The Alive.

Neukermans was one of a number of guest drummers that the band called upon to fill in for Cameron, and by all accounts, he absolutely crushed it.

That’s a High School senior named Kai sitting down to play drums on MYM with @PearlJam at Oakland2. Incredible presence. Like he was born to be there. #PJTour2022. #PearlJamtour #pearljam #PearlJamoakland pic.twitter.com/80cljHXzWl

The band called on Neukermans to play their song “Mind Your Manners.” And he killed it.

Check out the whole clip below.

Thx to @eddievedder’s daughter @OliviaVedder11 for finding Kai Neukermans on @YouTube via @TheAliveBand. The Force is strong with her. And Kai! Here’s the link to Kai’s entire @PearlJam MYM performance: https://t.co/t30zy9s0Zv

He looks like he was born to play for PJ. Neukermans is like a madman on the sticks, that hair flowing as he pounds the drums in a fury.

What an awesome solution to a less than ideal situation. With no further postponements or cancellations, Pearl Jam can continue on with the tour as scheduled. And Neukermans now has the story of a lifetime.