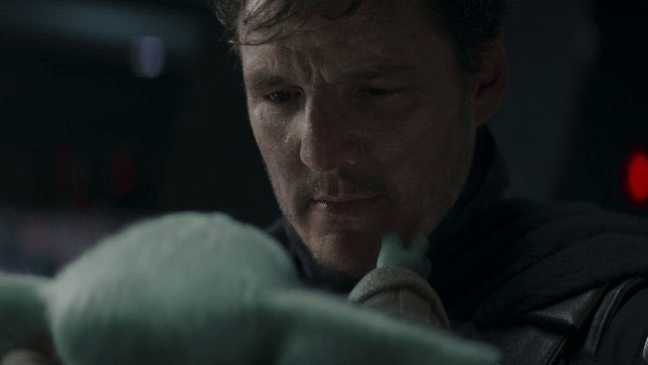 Earlier this week, it was announced that for the first time ever, a non-Netflix show topped Nielsen’s streaming charts, as Disney+’s The Mandalorian led the way in 2020 with 1.34 billion (with a B!) minutes viewed.

At the center of the groundbreaking live-action Star Wars series is Pedro Pascal, who stars as the titular Mandalorian, Dij Djarin.

While Pascal has been a working actor for over a decade, he really broke onto the scene back in 201 when he starred as Oberyn Martell in the fourth season of Game of Thrones. And ever since then, the dude has been strapped to a rocketship of success, becoming a bonafide A-lister in the process.

In a recent interview with IndieWire, Pascal discussed his truly incredible rise in the Hollywood ranks and briefly touched on one of his many recent movie star moments: his emotional farewell with Baby Yoda in the season two finale of The Mandalorian.

“The entire idea of getting to inhabit somebody who, since they were a child, no human has seen their face,” said Pascal, “it was almost impossible to imagine the level of nakedness and exposure, the overwhelming paralysis. It can’t happen, but it’s a mission and the child has to be saved. It was a super-exciting dance of profound, incredible restraint and total exposure. I can count on my one hand the lines the character had. On the other hand, he’s desperately trying to hide in a room without a mask with his face exposed. It was cool and it was strange.”

The finale was another mind-out-of-body experience. Pascal was hyper-aware of the impact Grogu touching his face would have on the global audience. “At that point, I knew what it would mean for everyone to experience that kind of threshold between the character and the child,” he said. “We follow this story for two seasons; there’s this bond that grows between the two of them. He tries to not let himself soften, but he cannot help himself. This practical story logic brought something else about that moment, what it would mean to touch his face.” [via IndieWire]

Pascal’s comments only further highlight the tricky situation that The Mandalorian now finds itself in, as the evolving father-son bond between Din Djarin and Grogu represented the elemental, core appeal of the show, which was watching these two grow up together side-by-side.

Now, while I do think Grogu returns to the series eventually (in fact, it wouldn’t shock me if we got occasional updates in season three), the momentous nature of the pair’s goodbye suggests it’ll be some time until we see the two together again.

We recapped and reviewed every episode of The Mandalorian on the Post-Credit Podcast, so check that out if you want to relive all of season two’s epic moments.