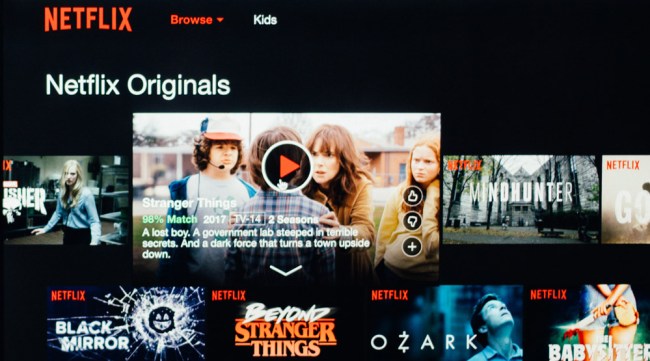 Netflix has been testing out an instant replay feature on some subscribers without asking them and because people will look for anything to become outraged about, they are getting very, very mad about it.

“We’re trying out a feature which gives Netflix members the ability to rewatch favorite scenes and memorable moments with the click of a button,” a Netflix spokesperson told the Los Angeles Times. “Right now we’re just looking to learn from it and may or may not roll it out more broadly in the future.”

Here’s how it works…

When a particularly compelling scene happens in a movie or show on Netflix, a message pops up that asks, “Watch This Scene Again?” Then, if you want to watch it again, you can with a single click.

Most digital streaming devices already allow consumers to rewind and fast-forward. Netflix’s new feature offers a more sophisticated version of that functionality by replaying whole scenes or sequences with one click or tap.

Netflix declined to provide more details on the duration of the test or the kind of feedback it was receiving.

Perhaps the reason Netflix declined to provide details is because the feedback has been really, really bad. Perhaps.

Hey @Netflix_CA @netflix if I want to watch a scene again I use the remote. This is extremely disruptive with descriptive audio.

NETFLIX STOP ASKING ME IF I WANT TO “WATCH THIS SCENE AGAIN” IT IS TAKING ME 4 HOURS TO WATCH A DAMN MOVIE.

Just switched internet service providers. Just updated my PS4. Just booted up Netflix. What’s with this “Watch That Scene Again” bullshit that keeps poppin’ up? Can I turn that off?

What committee at @netflix thought the “watch this scene again” pop up was a good idea. They obviously hate movies and can’t sit still for 5 minutes. Dumbest thing ever. Stupid idea. Not get rid of it.

@netflix "Watch this scene again" really?! Get out of the way of the content!

@netflix
“Watch this scene again?”
Not yalls best feature, can we somehow disable this

Hey @netflix, that “watch this scene again” pop-up in the middle of a movie is garbage and you should be ashamed of yourselves.

Well @netflix is now essentially useless with it’s incessant “watch that scene again?” Prompts ruining every movie.
It’s been a long run but this level of stupidity has me unsubbing

Dear @netflix – I need to know how to turn off the "Watch this scene again" button that has just recently popped up in some movies on your service. I absolutely do not want to see that button, it doesn't contribute to the viewing experience, and I know how to rewind. Seriously.

Just saw the first kissing scene in the movie Dumplin. Netflix then flashes a menu, “Watch That Scene Again.” I love that their algorithms work for good, evil, and neutral. “Teens rewind this scene a bunch. We could make more scenes like it or… Add a kissing scene button!” pic.twitter.com/LPBdfJJOrr