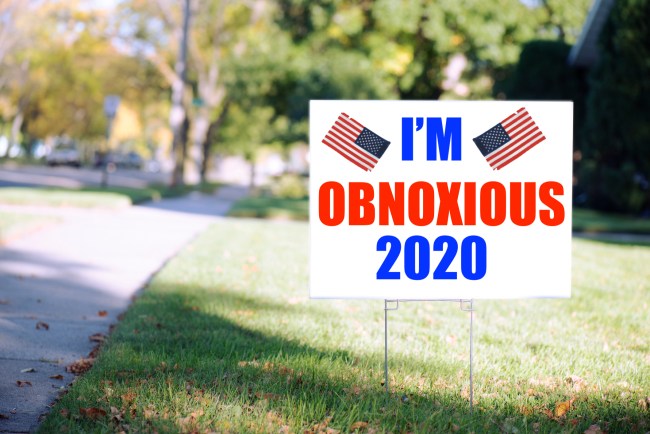 Full transparency: I had no idea who I was going to vote for in the upcoming presidential election until I saw Debbie Pendercooch’s inspiring lawn sign.

I was taking a burn cruise before dinner to get one solitary hour away from the wife when I began contemplating the merits of each candidate.

They are both old and white and men, I pondered aloud in my white Honda Civic with a custom spoiler, struggling to conjure up a substantial difference.

Both are accused of being sexual deviants, I considered over the roar of R. Kelly’s Ignition Remix.

I was spinning my wheels.

But as I pulled onto Salem Road en route to guzzle a fifth of Jack on the 50-yard line of my old high school football field, it hit me with the force of one million combat soldiers.

The hairs on my neck stood up. My body went cold. I was overcome by the urge to exercise my civic duty.

Who is this Trump fella? I thought, deducing that only a good and pious man could move someone into such a nuanced and powerful act of patriotism.

I rolled down the driver’s side window and inhaled deeply, as if employing all my senses would allow me to easily access this landmark moment in the future. The intoxicating scent of Love of Country weaved through the stench of Newport menthols cascading from Ms. Pendercooch’s kitchen window.

I reclined my seat and began playing Springsteen’s Born in the U.S.A. on full blast, blissfully ignoring the anti-nationalistic sentiment and focusing on the sweet saxophone while envisioning Mr. Trump handing every American a bag of money and the keys to a Hummer H3.

Thank you, Ms. Pendercooch, I mouth to no one. Next stop, the polls.