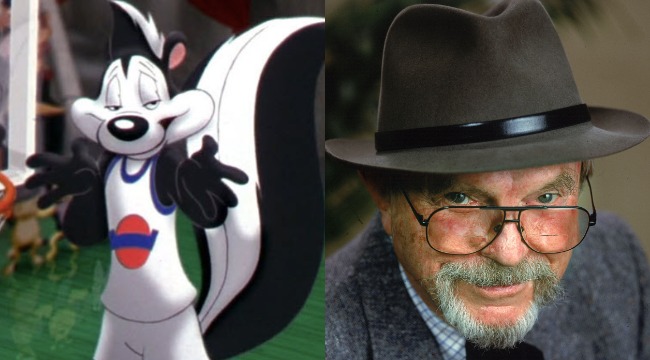 If you told me as I walked off the graduation stage with an Economics degree in hand that in 10 years I’d be writing about the deficiencies of a cartoon skunk, I probably would’ve enlisted in combat.

Le Pew, a C-list Looney Toon at best, is finally getting a taste of limelight after being charged with adding to “rape culture” by New York Times columnist Charles M. Blow and getting axed from the Space Jam sequel. A tough break for the pixelized digital entity, but a welcomed distraction for all of us focusing on the Right Things.

Now, Linda Jones is in damage control as her late father’s name is now linked with sexual assault. Chuck Jones, credited as the creator and original animator of Pepe and other Looney Tunes, passed away nearly two decades ago, but Linda spoke to TMZ about what she deems an over-reaction to the work of a very liberal guy.

Linda says she doesn’t think anyone who ever watched Pepe was inspired to go out and rape, or even harass, people. She gets pretty literal, saying Pepe never raped another character on the show…

Still, LJ just doesn’t think Pepe should be canceled or shelved over this — because the OG running gag with him was never meant to be predatory … she says it was more about how much he stunk as a suitor, despite thinking he was desirable.
She does admit Pepe’s grabby approach toward Penelope Pussycat certainly doesn’t look good by today’s standards … but insists folks who were watching him in the ’50s, ’60s and ’70s were NOT thinking of that dynamic as normalizing rape culture.

RW blogs are mad bc I said Pepe Le Pew added to rape culture. Let’s see.
1. He grabs/kisses a girl/stranger, repeatedly, w/o consent and against her will.
2. She struggles mightily to get away from him, but he won’t release her
3. He locks a door to prevent her from escaping. pic.twitter.com/CbLCldLwvR

Linda suggested that Le Pew could rebrand to “a perpetual job-seeker who keeps getting rejected, but constantly changes up his routine thinking he’s the perfect candidate.”

Let me write the pilot.

“Says here Mr. Lew Pew that you have a doctorate in Quantum Mechanics and Civic Engineering.”

“Yes, sir. I am also proficient in Excel.”

“You sound like the perfect candidate. One last question just for the paperwork: What’s that strapped around your ankle?”