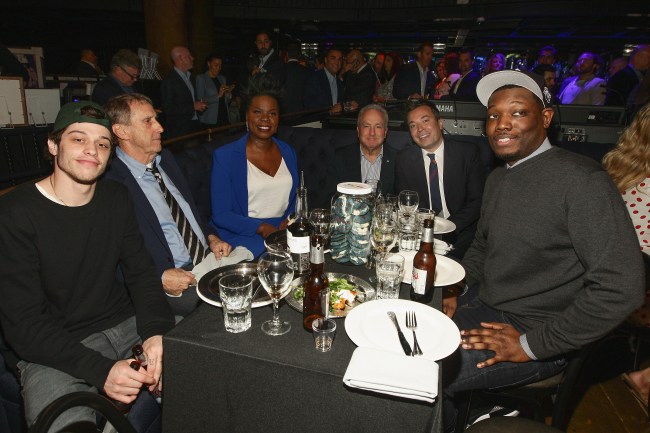 Sarah Silverman, Robert Downey Jr., and Rob Riggle were all canned from SNL after just one season. Jenny Slate was fired for swearing on air, and Damon Wayans was axed for neglecting to run a character edit by producers.

One could argue that Pete Davidson has disgraced the show far more than the aforementioned cast members, but is evidently immune to consequence.

In a one-hour interview back in February with Charlamange tha God in the lead up to his comedy special Alive From New York, the 26-year-old comedian expressed frustration with being the show’s whipping boy and being “painted as the big dumb idiot.”

“I personally think I should be done with that show because they make fun of me on it.”

“It’s like, whose side are you on? You know, I have a weird feeling in that building where I don’t know whose team they’re playing for, really — If I’m the joke or I’m in on the joke,” he said.

Saturday Night Live sources then told Page Six that Lorne Michael’s gave Pete Davidson the star treatment, allowing him to take a week off to attend Ricky Velez’s wedding, a gesture that is “unheard of.”

Davidson has evidently changed his tune on his future with the sketch show during an exclusive interview with Entertainment Tonight, saying he has no intention to leave the show he joined in 2014 when he was just 20 years old.

Davidson is gearing up for the debut of the semi-autobiographical The King of Staten Island, a Judd Apatow-directed movie about Pete Davidson growing up in Staten Island.

❤️ this tweet to get a reminder when The King of Staten Island is available on demand June 12. pic.twitter.com/Gje6Vcl8Z8