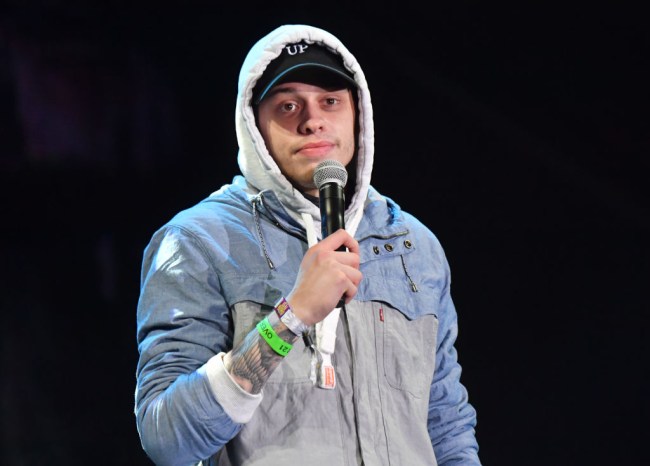 You’d imagine that comedians who get paid to tell jokes for a living would appreciate a quality joke. However, Pete Davidson doesn’t appear to be able to take a joke. Davidson kicked out two students at a comedy show because one of them was wearing a T-shirt featuring Ariana Grande.

On Wednesday, there was a student-sponsored comedy event starring Pete Davidson at the University of California Merced. Two UC Merced students attended the show after they won front-row tickets.

Ivan Martinez wore an Ariana Grande T-shirt to the comedy show, but insists that he wore the shirt because he is a huge fan of the pop singer and not because Ariana is the ex-fiance of Davidson. The Saturday Night Live comedian didn’t see the humor in the shirt and allegedly attacked Martinez. The students say they were bullied, embarrassed, and eventually kicked out of the comedy show for wearing the shirt.

RELATED: Mac Miller And Larry David’s Daughter ‘Leaned On Each Other’ After Breakups With Ariana Grande And Pete Davidson According To Report

Martinez said that he didn’t laugh at any of Pete’s jokes. “He made a child molestation joke, which I did not find funny. He called me out for, I guess, not laughing at his joke,” Martinez told the Merced Sun-Star. “He said, ‘Why is this dude all serious?’ He kept asking me if I had anything to say.”

Martinez said Davidson was “cussing at me, calling me names, just encouraging the crowd to chat and cuss.” Davidson, who in the past has made many stand-up jokes and SNL sketches about his failed relationship with Ariana, demeaned Martinez by saying, “You’re just an asshole, just an asshole.” Davidson then called Martinez “an idiot.”

Aquirre defended Martinez and said that “this is a student show sponsored by students.” The SNL comedian responded by saying, “No, this is my show and you’re getting kicked out.” “Get them the f*ck out,” Davidson said to staff at the show. Not exactly the best comedic crowd work.

Martinez and Aguirre, who are a gay couple, said that some people in the crowd at Davidson’s show used homophobic language to denigrate them. “It was like public humiliation,” Aguirre said. The alleged harassment continued online after the show.

Aguirre said they reached out to administrators at UC Merced over the bullying and he said, “rather than help us, they rather keep us silent, and they’ll threaten us with some kind of retaliation if we decide to pursue this further.” “We want a public apology” from the Campus Activities Board and Davidson Aguirre said.

UC Merced officials issued a statement on the situation. “The university takes allegations of discrimination very seriously and have worked diligently to investigate this incident. Campus officials in Student Affairs have met with the involved students on multiple occasions and have offered several resources — including Title VII, Title IX and ombuds services — for the students to report the incident. No report has been filed at this time.”

This has not been a great week for Pete’s comedy gigs. Earlier in the week, Davidson kicked out an audience member who made a joke about Mac Miller during Davidson’s show in South Orange, New Jersey.