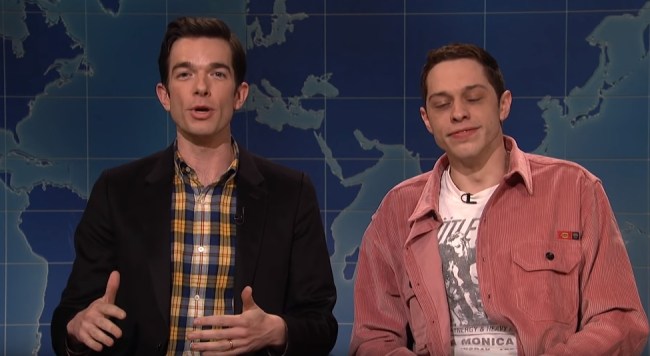 Pete Davidson finally addressed his mental health on the latest episode of Saturday Night Live. On SNL‘s Weekend Update, Davidson cracked jokes about his alarming post from December while giving his review of Clint Eastwood’s latest movie The Mule.

Davidson went to see The Mule with former SNL writer John Mulaney and the two comedians revealed how much they loved the movie are now obsessed. Mulaney are allegedly hanging out a lot more following Pete’s suicide scare from last month. “I’ve been spending time with Pete to try to show him that you can have a life in comedy that is not insane,” Mulaney said. “A sober, domestic life.” Pete replied, “Yeah, and after observing John’s life, I publicly threatened suicide. I’m sorry, I know I shouldn’t make that joke.”

Davidson and Mulaney dissect The Mule movie, which Eastwood plays a 90-year-old botanist turned drug mule that works for a Mexican cartel who apparently has two menage a trois scenes in the movie.

RELATED: Pete Davidson Wants You To Know He Doesn’t Have A Large Piece Despite What Ariana Grande Said. Wait. What?

Saturday Night Live has been on a holiday break for the past couple weeks and in the last show, Pete didn’t appear in any sketches. Hours before the show, Davidson wrote, “I really don’t want to be on this earth anymore. I’m doing my best to stay here for you but i actually don’t know how much longer i can last.” Davidson then deleted his Instagram account.

This week, Pete was in a skit titled “Millennial Millions,” which is a game show where millennial contestants compete against baby boomers to win prizes like social security and health insurance.