In Pete Davidson’s Stand-Up Return He Asks If Louis C.K. Should Die, Claims He Tried To Get Him Fired From ‘SNL’ 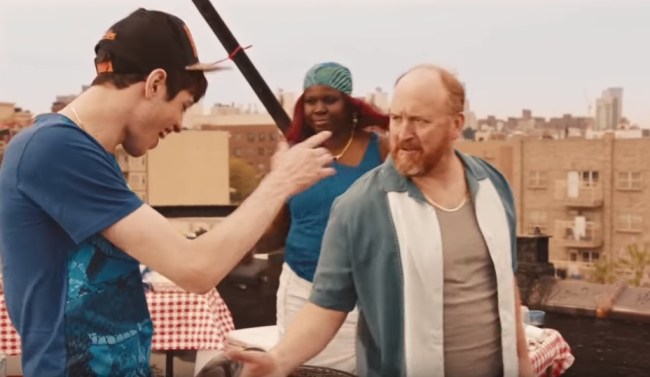 Pete Davidson made his return to stand-up comedy and was quick to stir the pot. The Saturday Night Live star’s recent comedy routine discussed the end of his relationship with Ariana Grande as well as going after Louis C.K., who Davidson claims tried to get him fired from SNL.

On New Year’s Eve, Davidson made his first performance since his cry for help on Instagram when he said he “didn’t want to be on Earth anymore.” Pete performed two shows on NYE, one in Medford, Massachusetts and the other at the Wilbur Theater in Boston.

The 25-year-old comedian talked about his ex-fiancée Ariana Grande, who he was engaged to for five months until she broke up with him in October. Speaking about Grande’s song Thank U, Next, Davidson said, “Here’s the thing about the breakup song. Usually breakup songs you know who it’s about but you don’t really know. That G named all of us. Bam. She named all of us.” Grande’s song was about all of her exes including Big Sean, Ricky Alvarez, Mac Miller, and Davidson.

“That sh*t came out before I had to put on a f*cking duck hat and be like, ‘derrrp here’s the pizza!’ So all my friends were there,” Davidson said of the breakup song that was released hours before a Saturday Night Live episode in November. “It was a sad day. We didn’t know it was going to happen.”

Then Davidson changed his focus to Louis C.K., who he claims allegedly tried to get him fired from SNL. Davidson’s alleged joke about the fellow comedian weirdly asks fans if they think Louis C.K. should die:

“I got a Harry Potter tattoo. Then the next day Alan Rickman the guy who played Snape died, and I was like, oh, what a weird coincidence. Then I got a Willy Wonka tattoo. Next day—Gene Wilder dies. Now I’m like, alright, that’s a coincidence, that’s weird. So I’m thinking of getting a tattoo of Louis C.K., what do you guys think? That joke used to be about Aziz Ansari, but Aziz has been nice to me recently.”

Louis C.K. made headlines this past weekend after his controversial stand-up set mocked Parkland shooting survivors and joked about young people demanding that everyone call them by their preferred pronouns. Louis C.K. was accused of sexual misconduct in 2017 and five female comedians allege that Louis masturbated in front of them.

During his comedy routine, Davidson told the crowd that Louis C.K. attempted to get him fired from Saturday Night Live. When C.K. was hosting SNL in April of 2017, Pete said Louis allegedly “told all the producers in front of me that all this kid does is smoke weed and he’s gonna smoke his career away.” Davidson claims that Louis told the longtime SNL executive producer, Lorne Michaels, “that Pete smokes so much weed that it makes people uncomfortable.” Davidson then referenced the allegations against Louis C.K., “Then five years later this motherf*ker’s been locking doors and jerking off in front of people.”

Pete has been very honest about his love of weed. “There was no way I could stop [smoking]. I was like somebody has to put me in a house where there is literally nothing,” Davidson said on The Howard Stern Show last September. Davidson checked himself into rehab for marijuana back in 2016, but he said that weed wasn’t the problem but rather his borderline personality disorder and Crohn’s disease. “I have Crohn’s disease, so it helps more than you can imagine,” he told Stern. “There was a point where I couldn’t get out of bed. I was 110 pounds. I also just love smoking weed. I’ve been smoking weed every day for 8 years.”

Louis C.K. and Davidson have appeared in at least three SNL sketches in the past three years and most recently from April of 2017.

RELATED: Pete Davidson Got Refreshingly Candid About His Mental Health Struggles After His Breakup With Ariana Grande