Dr. Drew Tells Ariana Grande To ‘Stay Away’ From Pete Davidson Because ‘His Safety Is At Risk’ 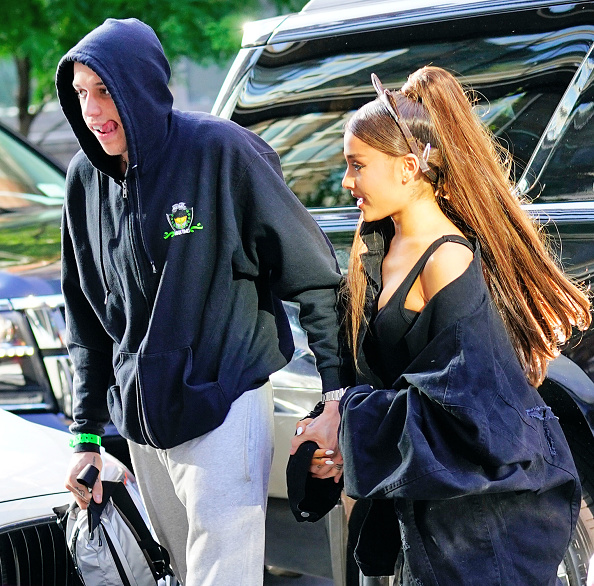 I thought we were done with the whole Pete Davidson/Ariana Grande saga at least for the rest of 2018, if not forever, but here we are. Dr. Drew has brought his “expertise” to the dysfunctional celebrity relationship that has imploded before our very eyes.

Last Saturday, Pete Davidson posted an alarming Instagram message that said: “I really don’t want to be on this earth anymore. I’m doing my best to stay here for you but I actually don’t know how much longer I can last.” Many, including Ariana Grande, read that to be a cry for help. Ariana rushed to the 30 Rock studios where SNL is broadcast. Pete refused to see his ex-fiancee and had security block her from entering the studio.

Now Dr. Drew Pinsky is offering his diagnosis from a distance and “professional advice” to Davidson and Grande. “He had his ideal partner. He had his life, as far as he was concerned, lined up in front of him, he was gonna marry her, and that whole life and that whole relationship shattered in a moment,” Pinsky told TMZ on Friday. “That would be horrible for anyone and it’d be impossible to tolerate that in public.”

Pinsky noted that Davidson’s borderline personality disorder and the loss of his father made Davidson “more at risk” than the average person. “Pete has special issues … When the breakup first happened his safety is at risk,” Pinsky continued. “This is a very serious problem. On top of all that poor Pete Davidson … is getting trolled online. When you’re unstable like that and you’re raw, it cuts right through you.” Pinsky gave a warning to Grande, “It’s nice for Ariana Grande to express her love and support of him, but she needs to stay away.”

In 2013, Pinsky said he had no plans to go forward with another season of Celebrity Rehab because he’s “tired of taking all the heat” following the deaths of five former cast members. “In February, country singer Mindy McCready — who had appeared on the VH1 reality show in 2009 — committed suicide after a long battle with substance abuse and other personal demons,” The Hollywood Reporter wrote. “King died of accidental drowning, with cocaine and alcohol found in his system, in June 2012; the Celebrity Rehab body count also includes Taxi star Jeff Conaway, Alice in Chains bassist Mike Starr and Real World cast member Joey Kovar.”

Pinsky has been the host of several celebrity rehab TV shows including Celebrity Rehab with Dr. Drew, Sex Rehab with Dr. Drew, and Celebrity Rehab Presents Sober House. Serious question: Has Dr. Drew ever helped someone suffering from addiction? Or has he used D-list celebrities by putting them on television to exploit their mental health issues to build an entertainment brand built under the false guise of “treatment” with 24-hour cameras on sick individuals at the worst valley of their life? One more question, are mental health professionals supposed to provide a public diagnosis based merely on observing people on TV or from articles about the person? Just asking questions.