Pete Davidson Wants You To Know He Doesn’t Have A Large Piece Despite What Ariana Grande Said. Wait. What? 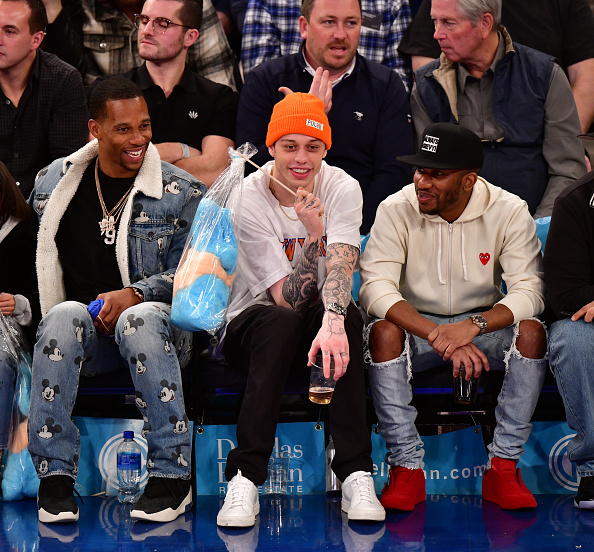 When someone pays you a compliment, no matter how big or how small, you say, “Thank you,” and carry on about your life and be happy that someone recognized something positive about you in this world that seems to elevate negativity. Even if the flattery is false, you say, “Thank you,” and pretend that the praise is true. Unless you’re Pete Davidson. When the Saturday Night Live star received a huge compliment from his ex-fiancée Ariana Grande, he went public to let the world know that the most important compliment a woman can give a man, wasn’t true about him.

Ariana has said on a couple of occasions that Pete is packing. In June, a fan asked Ariana Grande on how long Pete was. Pete is an interlude in Ariana’s album Sweetener, but Ariana interpreted the question as asking how big Davidson’s junk is. “Like 10 inches? Oh, f*ck…I mean…a lil over a minute,” Grande wrote in a now-deleted tweet.

Then Ariana seemed to confirm that Pete had Big Dick Energy (BDE) in her music video for Thank U, Next. In the music video, a package delivery guy doesn’t work for UPS, but rather BDE. The video shows a photo of Davidson with the caption: “HUUUUUGE,” which many believe to be a reference to Pete’s penis.

Despite the huge compliment, Pete has gone on the record to say the rumors that his junk is huge are fake news. Davidson performed at a comedy show at the Tarrytown Music Hall in New York on Saturday. The 25-year-old SNL comedian addressed the 10-inch penis in the room and called Ariana’s tributes to his schlong “mean” but “also genius.”

“I don’t like that she talked all that sh*t for my penis,” Davidson said in his stand-up performance. “Everything is huge to her. Why would she tell everyone that I have a huge penis? So that every girl who sees my d*ck for the rest of my life is disappointed.”

This is officially the weirdest flex ever. There’s no reason to tell the world that you don’t have a large chode. When the topic of your manhood is breached, simply smile. That’s not lying. You leave people with the mystery of your ramrod, without letting them know the truth that you’re not as endowed as your ex-girlfriend said you were.

The rumors of Pete’s prodigious piece could be the reason why Kate Beckinsale reportedly left a Golden Globes after-party with the Davidson after “flirting all night and sipping Moët champagne.”

When someone pays you a compliment, just say, “Thank you.” Didn’t Pete ever learn to never look a gift horse in the mouth?

Here is an inside look at the life of Pete Davidson.