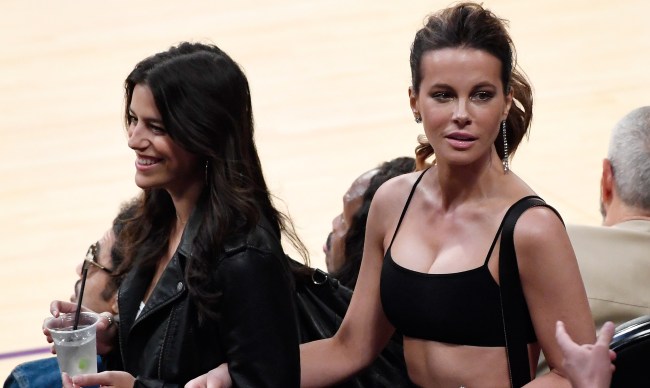 For years, I have been telling anyone who will listen that I would marry actress Kate Beckinsale on the spot if I could, never having actually met the woman in person.

I base that on three things. (1) I really like her acting work. (2) She is one of the funniest follows on social media, especially for a celebrity. And (3)…

All of these qualities are obviously not lost on those men who, you know, actually get to speak to her, like, say, Pete Davidson, who reportedly left a Golden Globes after-party with the Underworld star after “flirting all night and sipping Moët champagne,” as one does.

Whether that means anything as far as an actual relationship is yet to be seen, but Beckinsale, 45, has shown no problem dating men around the same age as her daughter Lily.

About a year-and-a-half ago Beckinsale was dating 21-year-old comedian Matt Rife, so Davidson, who is 25 (and obviously possesses some sort of magic wand that entrances beautiful women), is definitely within her wheelhouse age-wise.

Honestly, considering Davidson’s past, she might actually be good for him. She has said in a past interview that she has never been drunk, never done drugs, never had a one-night-stand, and doesn’t wear underwear. (Just seeing if you’re paying attention. She did actually say that, though.)

Of course, not everyone is as open-minded as Beckinsale is, so when she posted a photo of her mom on her always-entertaining Instagram account, someone just HAD to chime in with a complaint about her potentially hooking up with Davidson.

“Dear heavens, Kate. Not Pete Davidson,” someone wrote in the comments of the photo – a photo that contained this hilarious caption…

“It was great that my mother covered wearing hot pants really well and rocking a fashion owl so that I could chill for my awkward teenage years and just enjoy having the teeth of an adult horse, waiting only a couple of decades for my head to grow to accommodate them.”

Of course, Beckinsale being Beckinsale, she responded in her usual irreverent manner, writing, “No, that’s my mother. Easy mistake.”

Probably not the answer the commenter was looking for. Good luck, Pete, if anything comes of this. You’re going to need it.