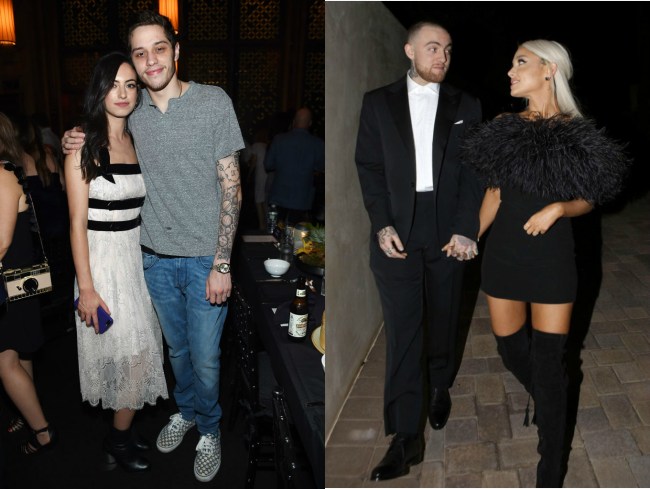 According to a new report, after Pete Davidson and Ariana Grande got into a serious relationship with each other, it brought their exes close together. According to Us Weekly, Cazzie David and Mac Miller “leaned on each other” following the breakups involving their former lovers Pete Davidson and Ariana Grande respectively, both relationships lasted a little over two years.

After Grande and Davidson shared their whirlwind romance with the world and announced their engagement in June of 2018, only weeks after they first starting dating. Cazzie, who is the daughter of Larry David, and Malcolm James McCormick confided in each other according to an anonymous source.

RELATED: Pete Davidson Wants You To Know He Doesn’t Have A Large Piece Despite What Ariana Grande Said. Wait. What?

“Cazzie and Mac never met but started speaking because of Ariana and Pete’s relationship,” a source said. “[They] leaned on each other.” We all wish we could lean on Mac Miller after a bad breakup. The two became close friends while dealing with the end of their celebrity relationships.

This all sounds like very convenient celebrity gossip, but Cazzie hung out with Mac’s mom before the Grammys this past Sunday. Cazzie posted a photo of Karen Meyers, Mac’s mother, and Kelly Clancy, the wife of Miller’s manager.

“It’s still a relatively new friendship, and primarily limited to social media, but Cazzie and Karen think very highly of each other,” a source told E! News. “Cazzie reached out to Karen with her condolences after Mac died and since then she and Karen have been exchanging messages.”

Mac’s family attended the 2019 Grammys because Miller’s fifth album Swimming was posthumously nominated for best rap album. Mac didn’t win, which sent Ariana into a tantrum. Grande posted, then quickly deleted tweets that she was very upset that Cardi B won the Grammy and not Mac.“Trash. F—k. Bulls—t. Literal bulls—t,” the Thank U, Next singer wrote. Grande also tweeted and deleted a post about Mac’s mom. “This. This is what I meant. Karen was gonna have a green suit made,” Ariana wrote.

Ariana Grande is a mean girl who reacted this way when Cardi B won, because Mac Miller didn’t. I’m sorry he’s gone, but crapping on someone else’s big moment? Now deleted but you know- receipts. #Grammys pic.twitter.com/2RvsuSVVLR

Cardi won the award for her debut album Invasion of Privacy, and backstage she shared the Grammy with Mac’s family. “I read an article that Mac Miller’s family said that if he don’t win they want me to win, so I’m sharing this Grammy with you,” Cardi said. Miller died in September from a drug overdose at the age of 26.