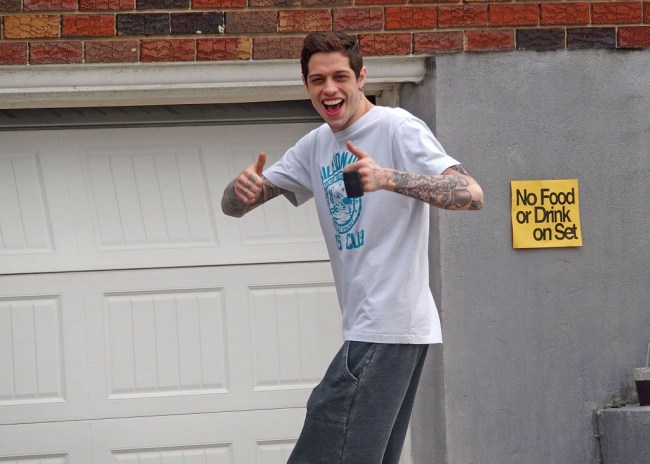 During an episode of Saturday Night Live that was supposed to be celebrating the triumphant return of Eddie Murphy, along with holiday cheer, Pete Davidson hinted that he was going to rehab.

Davidson was brought on for a special segment during Weekend Update by host Colin Jost, where Davidson was “supposed” to give his astute political insight into the impeachment hearings of President Donald Trump. But he has “no idea what’s going on,” because he’s “still trying to get through The Irishman.”

They moved onto celebrity relationships since Jost got engaged to Scarlett Johansson in May of 2019, and Davidson is dating model Kaia Gerber since October. Cindy Crawford’s 18-year-old daughter is the latest celebrity that Davidson has dated. Davidson said because he dates beautiful women, everyone wants to “punch him in the throat.”

Let’s take a look at Pete Davidson’s dating history. In 2015, Davidson was dating Carly Aquilino, who is a star of MTV’s show Girl Code. From 2016 to 2018, Pete was in a relationship with Larry David’s daughter Cazzie David. From there, he moved on to Ariana Grande, they got engaged to be married, then they had a messy breakup. In January, Davidson starting dating Kate Beckinsale, but that ended after four months. And before Kaia, the 25-year-old SNL star briefly dated actress Margaret Qualley.

When Colin asked Pete what his plans for the holidays are, Davidson replied with air quotes, “I’m going on a little vacation.”

“You know, the kind of vacation where insurance pays for some of it, and they take your phone and shoelaces,” Davidson said. “And you have roommates, but it still costs like $100-grand.”

Davidson has not been shy about discussing his mental health. Last December, Pete talked about living with borderline personality disorder (BPD) following the split between him and Ariana Grande.

“I’ve been getting online bullied and in public by people for 9 months,” Davidson wrote in a since-deleted Instagram post. “I’ve spoken about BPD and being suicidal publicly only in the hopes that it will help bring awareness and help kids like myself who don’t want to be on this earth. No matter how hard the internet or anyone tries to make me kill myself. I won’t. I’m upset I even have to say this.”

On December 15, 2018, Davidson wrote on Instagram that he “didn’t really want to be on this Earth anymore.” Davidson quickly deleted the message as well as his entire Instagram account, which is something he does pretty regularly.

Pete Davidson just posted this on his verified Instagram account. If you know him, I hope you’ll give him the love and support he needs. If you don’t, you can still give him support. https://t.co/osNU2MdppU pic.twitter.com/IIlfC38BqY

Whether Pete is joking about going to rehab or actually going to rehab is not clear. If he is going to seek treatment, hopefully, he gets the help he needs and takes as long as his body requires to get in a better place.