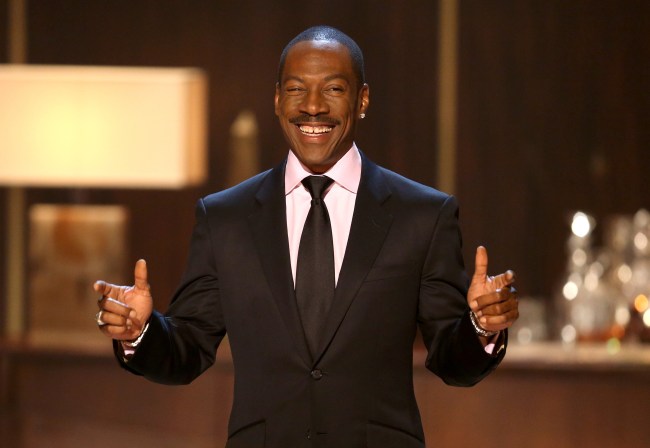 Eddie Murphy hosted SNL for the first time ever and he brought back some of his most beloved characters including Buckwheat, Gumby, and Mister Robinson. Murphy also appeared as new characters too.

Eddie kicked off the show with his monologue where the crowd welcomed him with an “ED-DIE” chant. Murphy talked about his 11 kids, while making jokes about Kevin Hart and former “American Dad” Bill Cosby. Murphy also teased Coming 2 America.

Eddie was joined on stage by fellow great comedians Tracy Morgan, Chris Rock, and Dave Chappelle, who all offered their own comedy sketches for Murphy to use during his Saturday Night Live appearance.

In a comedy sketch titled “North Pole News Report,” Eddie appeared as an impassioned elf at the North Pole named Kiddle Diddles. The elf witnessed a horrible fire that was caused by a polar bear that broke into a toy factory and ate several elves. The eyewitness spoke to the local North Pole News and gave a very flamboyant description of the elf carnage and ended up blaming Santa Claus, even saying that Christmas was canceled.

There was another holiday-themed skit about family getting together during this special time of togetherness and love. Just kidding! The comedy bit shows how quickly everything unravels and how everyone is at each other’s throats after spending more than 30 minutes together. Former SNL alum Maya Rudolph returns as everyone puts on a happy face during Christmas dinner.

This week’s SNL musical guest was Lizzo and she performed Truth Hurts and Good As Hell.