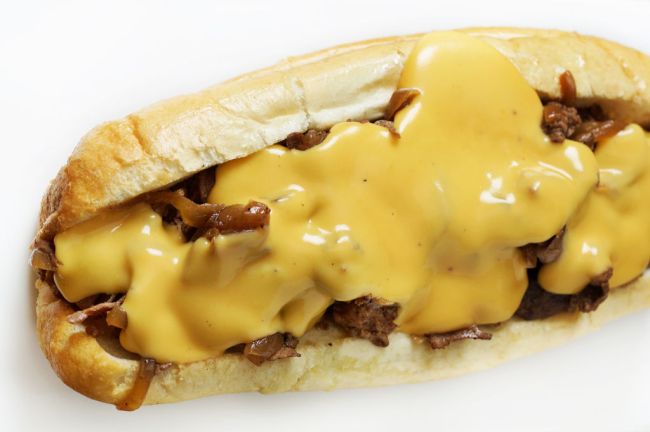 Rene Kobeitri, the owner of a South Philadelphia cafe, celebrated his birthday by breaking a world record. More than a dozen chefs from nearby restaurants partook in making the “World’s Longest Cheesesteak.” I put the title in quotes because it’s totally bogus. The record shouldn’t count.

In the heart of Philly’s Italian Market, a stretch of tables more than two blocks long blocked 9th street from Wharton Street to Washington Avenue.

Kobeitri and his friends set out to beat the previous world record of 480 feet and his reasoning for the big celebration is incredible in every way.

“This year I decided to make it big because I love America, and when you love America, you only have to go big,” Kobeitri said to 6ABC.

Happy birthday Rene @rimcafe his friends got together and they made a 500 foot cheesesteak Along Ninth in Street in his honor pic.twitter.com/x5SxIsnLGh

To make it even better, all proceeds from the afternoon/evening were donated to those who were affected by the COVID-19 global pandemic. Famous cheesesteak spots like Pat’s and Geno’s were a part of the lineup, but so were restaurants beyond the classics. A local Indonesian restaurant joined in and a local taqueria was in the mix. Greek, Japanese and Cuban restaurants also added their twists.

Ultimately, the cheesesteak was 510 feet long, which beat the previous record of 480 feet.

However, it has not officially been deemed a world record yet. And it shouldn’t, because the execution was questionable.

Why the world record should not count:

For starters, a Philly cheesesteak is a sandwich made from thinly sliced beefsteak, typically ribeye. It is served on a long hoagie roll and smothered with melted cheese, typically american, provolone or cheese whiz/nacho cheese. From there, it is commonly topped with onions, peppers and mushrooms.

Bringing non-cheesesteak restaurants into the mix for the record was a really cool idea. Having different ethnic takes on a cheesesteak is a really unique angle. There was a ravioli cheesesteak, a marinara cheesesteak and a Spanish cheesesteak, among other twists on the original sandwich. They all sound delicious, but that is very different than the standard. It should not be considered a true cheesesteak.

In addition, the hoagie roll was not singular.

Ravioli Cheesesteak(!) Assembly of the 600-foot cheesesteak is nearly complete. Heading back to the mic area. pic.twitter.com/XJFGrLaMny

They are constructing a 600 foot long cheesesteak down on 9th street in South Philly to beat a record of world’s longest… pic.twitter.com/5U9RhT5StR

All of the dough is connected.

Whether the record should count or not is up for debate. (It’s shouldn’t.) But what is not up for debate is how cool of an event it was. It brought different cultures together in one setting to join forces around a Philadelphia staple. The world record attempt became a super cool representation of the melting pot.

It also made for some hilarious moments surrounding the news coverage.

Everyone is asking if there is a fire nearby because all the helicopters. No they are filming this. Apparently you can’t report a huge cheesesteak on citizens app… pic.twitter.com/fmgBzcrxod

Wife: “why is there a chopper over our house? Fire?”

The 480-foot record should hold for now, but surely it wasn’t as cool of an evening.