Here’s Over $5 Million Worth Of Lamborghini, Porsche, And Other Luxury Cars Getting Destroyed By A Bulldozer 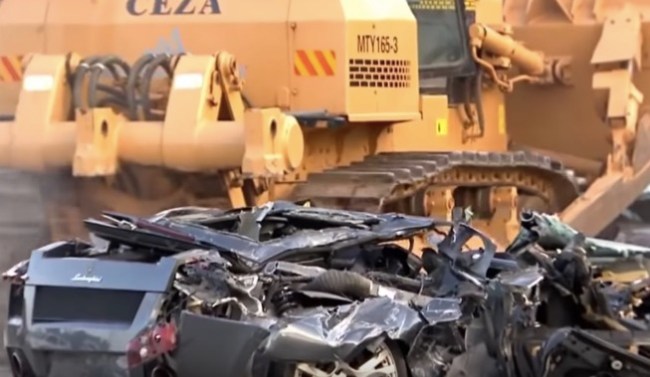 On Monday, as part of Philippine President Rodrigo Duterte’s anti-corruption crackdown, he took a bulldozer to over $5 million worth of luxury cars in the country’s Cagayan Province. The cars included ultra-luxury brands like Lamborghini and Porsche, as well as Mercedes-Benz and other high-end vehicles.

For this stunt, he rolled out a bulldozer and demolished all of the cars which had been illegally smuggled into the country and he filmed it so the entire world could watch in horror as he needlessly destroyed pristine vehicles:

Lamborghini, Porsche and Mercedes Benz among luxury cars destroyed as bulldozer crushes over $5 million worth of smuggled vehicles as part of anti-corruption drive in the Philippines. https://t.co/B6UPM6gi5Z pic.twitter.com/Yj0UsEunj2

Would it have been so awful to auction the cars off and donate that money to the highest-performing local police force? Or to a school that needs supplies? Or a hospital that needs funding? Did Duterte really need to roll out the world’s media to make a point that importers bringing in luxury cars illegally will lose those cars?

I know he isn’t exactly the most level-headed world leader but then again as an American, I don’t have much room to talk. Still, it seems like there were better ways to go about handling this than to run a friggin’ bulldozer over a Lamborghini that could’ve been auctioned off to raise money for his anti-corruption task force.