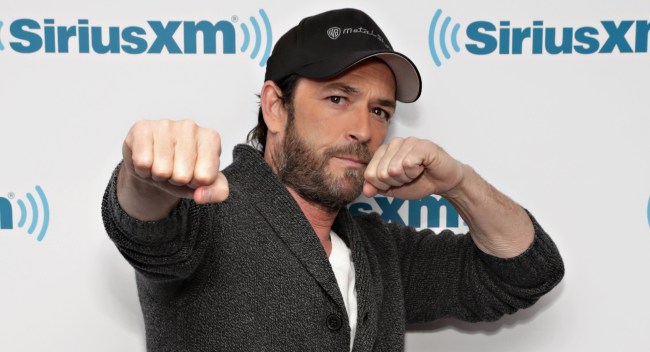 Fans of Beverly Hills, 90210 and Riverdale were stunned on Monday by the surpring news about the passing of actor Luke Perry. Reactions and tributes to Perry poured in from all corners and from a wide range of age groups.

One of the tributes that made its way to the internet was a photo of Luke in full dad mode rooting on his 21-year-old son, Jack Perry, aka pro wrestler “Jungle Boy” Nate Coy, competing for All Elite Wrestling.

The photo, taken by Esther Lin of MMAFighting.com, shows Luke in the balcony proudly holding up a shirt as his son celebrates in the ring.

“Up in the top left is Luke Perry, proud father, cheering on Jungle Boy at PWG in January. It was so sweet and adorable. And now I’m so incredibly sad,” wrote Lin.

Up in the top left is Luke Perry, proud father, cheering on Jungle Boy at PWG in January. It was so sweet and adorable. And now I'm so incredibly sad. pic.twitter.com/PT9CNAEPAm

Seriously as someone who lost their father too soon at a young age, he will cherish this photo you took beautifully and have shared. What a gift it is for all of us to get to see as on of his lasting images and the rise of his son. 😭

That’s a AMAZING picture Esther, Puts everything into perspective, Don’t EVER be too busy to go to your kids events because u just never know, so terribly sad 😢

This isn’t the first time Luke was on hand to cheer on his boy either. Back in January of 2017, Perry was already showing his support for his son’s career at a small event for Underground Empire Wrestling in East Los Angeles.

Naturally, like all good dads, Luke spent much of the match trying to get a good angle to capture video of Jack’s match on his phone.

As I said, like a dropkick to the gut.

We are saddened to learn that Luke Perry, father of AEW’s Jungle Boy has passed away at the age of 52, and our thoughts are with the Perry family. pic.twitter.com/FlSVG7WVG8

You know what else is like a kick to the gut? This footage, obtained by TMZ, from a Riverdale convention in Chicago last April.

In the video, a fan asks Perry how he would feel about a Beverly Hills, 90210 reunion, and he sounded very much down for it.

Sadly, as we reported on Monday, there is going to be a 90210 reunion, but now it will have to take place without its rock, Dylan McKay.