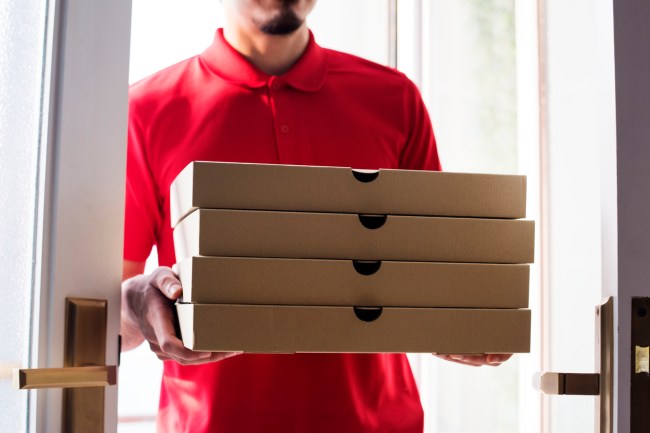 A pizza delivery driver rubbed his crotch with a customer’s pint of ice cream. The customer did not order the ice cream with a side of testicles; therein lies the problem.

Jonathan Terry of Buckinghamshire, England, ordered pizza and a pint of ice cream from Domino’s. Domino’s has ice cream? Must be a U.K. thing. Luckies. The driver delivered the pizza pies and Ben & Jerry’s Birthday Cake Ice Cream, which is vanilla cake batter ice cream with pink frosting, strawberry swirls, and cake pieces.

A doorbell camera caught the delivery person rubbing a pint of ice on his crotch before handing the food over to the customer. Ballsy.

“About 20 minutes after we received the delivery we went to get the ice cream out and weirdly I had a call from my girlfriend,” Terry alleged. “She said ‘I hope you haven’t eaten the ice cream that Domino’s have sent you.’ She then told me to go and look at the Ring doorbell [footage].”

Terry checked out the security video and noticed that his pint of ice cream had been teabagged.

“It felt quite disrespectful and very vile,” Terry told South West News Service. “My housemate said he felt violated — he was not happy.”

Domino’s driver rubs an ice cream tub on his crotch before handing it to customer pic.twitter.com/Hj4Oo1ytBL

Terry claimed that Domino’s offered him complimentary coupons, but he refused.

A Domino’s spokeswoman, Rachel Townsend, told Fox News that the company is investigating the nutty incident.

“We are conducting a formal investigation with this team member as a top priority. We have apologized sincerely and are working to resolve this issue with the customers so we can put this right,” Townsend said. “We were extremely disappointed to see this film and our driver’s behavior is unacceptable. We expect high standards of behavior at all times and clearly this individual has breached the trust our customers rightly expect from Domino’s.”

“If your ice cream isn’t delivered in 30 minutes or less, you get a free order of clap.”