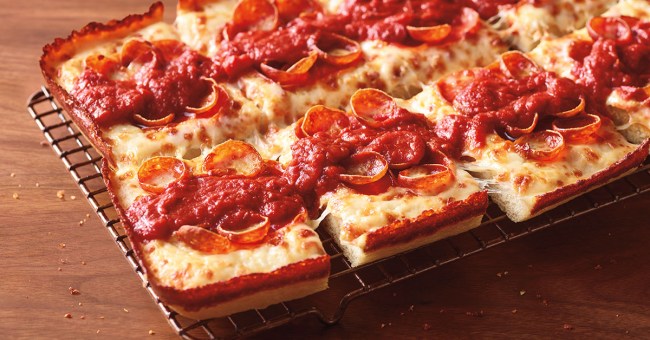 Real pizza fans know that the debate over New York-style pizza vs. Chicago deep dish-style pizza is majorly played out. Depending on the time and place, both are delicious when a craving for ‘za hits. If you’re going to waste your breath blabbering about pizza preferences, you might as well bring up some of the other, lesser-known styles worth discussing. Like New Haven-style apizza with the signature burnt crust, for example, or Chicago tavern-style pizza.

Detroit-style pizza has blown up in popularity in recent years. As the story goes, the style was originally started in 1946 by an Italian immigrant named Gus Guerra. The proprietor of a bar called Buddy’s Rendezvous, Gus wanted to make sfincione for the bar’s menu, a Sicilian-style pizza he grew up eating. Rather than using a baking sheet, he used a discarded steel pan drip tray from a Motor City auto manufacturing plant. When he added Wisconsin-brick cheese right up to the edge of the pan on the dough, the cheese caramelized into a frico crust at high heat. Pizza with a cheesy, crunchy golden-brown lace became an instant favorite.

The result was a style of pizza that’s thick, doughy, rectangular, and very heavy on the sauce. For decades, Detroit pizza was a regional style only celebrated by Michigan pizza heads in the know, much like a coney. But then it started popping up in pizzerias all over the United States, beloved for traveling well and reheating perfectly as leftovers. Ask pretty much anyone serious about making or eating pizza and they’ll tell you that Detroit style is towards the top of the list of styles to make.

In 2021, Pizza Hut debuted a Detroit-Style Pizza, marking the first major pizza chain to capitalize on the style. Then it disappeared off the menu, bumming out fans like myself who applauded the brand for getting it right on a delicious pizza innovation that was actually pizza – not a stunt-y hot dog-crust pizza that more-or-less looks inedible.

Last year, TheReportOfTheWeek’s Review Brah gave it a “9 out of 10”, noting that he was a “big fan” and giving it two thumbs up.

Due to popular demand, Pizza Hut Detroit-Style pizza is making its triumphant return to the Pizza Hut menu. Complete with a crispy cheese crust, savory cupped pepperoni, and generous dollops of premium vine-ripened tomato sauce on top of the cheese, per tradition.

It’s still for a limited time, but fingers crossed the sales are consistent enough for the suits at Yum Brands to permanently move it to the menu.

Pizza Hut Detroit-Style pizza comes in three options, along with a make-your-own option.

Not to stan too hard, but with Pizza Hut’s Detroit-style pizza, you get eight thick slices for under $15. It’s a tremendous value. I tried it again and the pepperoni blew my mind – there’s so much pepperoni covering the pie. The frico crust was crowning over the cheese in the corner slices in all its glory. Made me nostalgic for those Friday night pizza nights sitting in a booth with my Mom and siblings, stained glass lamp overhead, sipping Pepsi out of those signature red plastic cups.

kinda stoked that Pizza Hut brought their Detroit style pizza back. Imo, best chain pizza place pie out there for the money (starts at $11.99). Those classic deep dish flavors take me back. 🤤 pic.twitter.com/xdaYWuMLNz

To celebrate, the ‘Hut is celebrating with a song called “Pizza Hut Anthem” by TikToker Jonathan Moss, now out on Spotify, Apple Music and YouTube.

I asked Moss about the collab. Glad to hear he’s just as hyped about Pizza Hut’s Detroit-style Pizza as I am.

What inspired the sound of the new Pizza Hut anthem?

“The love I have for Pizza Hut, and the excitement I have when they bring back my favorites like Detroit-Style. I tried to capture the energy of getting off work, picking up a hot pizza and hanging with the posse on a Friday. To me, pizza is the definition of party food, so it should have party anthems too.”

Any thoughts on the Detroit-style pizza?

“It’s incredible! Square over circle, all day. The crispy crust is my favorite, it’s actually funny because I eat the Detroit-Style Pizza crust-first. Detroit-Style also inspired me to add a verse to my original Pizza Hut song and kicked off this partnership, so it holds a special place in my heart. To go from hanging with my friends at Pizza Hut in the red booth to hitting the booth to make a song for them is wild.” 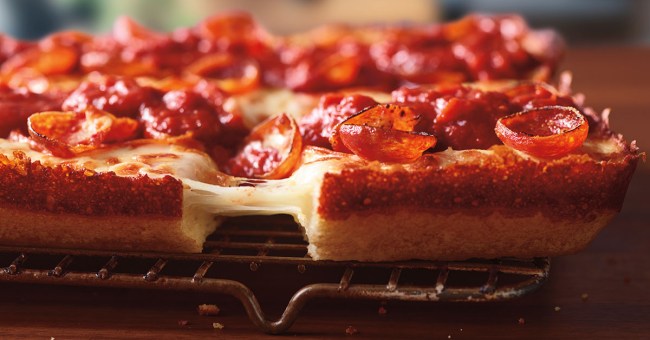