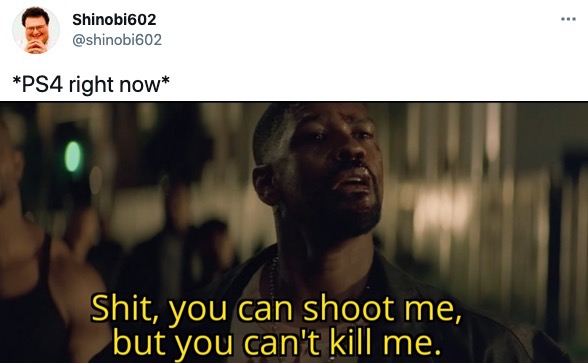 Chalk up an absolutely MASSIVE dub for Team PlayStation 4, an organization of which I am a longtime and proud card-carrying member. Nothing against PlayStation 5, to be honest, I just have always waited a year or so before upgrading my video game system to the next-generation model. This time around in particular, as I was in the middle of playing Red Dead Redemption 2 when the PS5 dropped. Couple that with the fact that new titles such as Assassin’s Creed: Valhalla and Spider-Man: Miles Morales were also dropping on the Ole Faithful that is PS4, and I saw no reason to upgrade to the PS5 just yet.

As it turns out, that PlayStation Procrastination turned out to be prescient, as Sony recently revealed that the next God of War game — which they also announced would be delayed until 2022 — would be made available on the PlayStation 4 (which was first released in 2013!!!). In fact, not only will the new God of War game hit the PS4, but so will Horizon Forbidden West and Gran Turismo 7.

“Where it makes sense to develop a title for both PS4 and PS5 — for Horizon Forbidden West, the next God of War, GT7 — we’ll continue looking at that,” said Hermen Hulst, head of PlayStation Studios. “And if PS4 owners want to play that game, then they can. If they want to go on and play the PS5 version, that game will be there for them.” [via PlayStation]

What this all means, essentially, is that the life of the PlayStation 4 has been extended, making the PlayStation 5 only necessary for frequent gamers who are interested in the highest quality of graphics.

Everyone trying to play God of War: Ragnarok PS4 in 2022. pic.twitter.com/qtjjJmtIMJ

your PS4 when it sees you come home with God Of War Ragnarok pic.twitter.com/ulENVvO4R7

Next God of War game bout to have that Base PS4 like: pic.twitter.com/D5MS3WilaQ

PS4 nation, stand up — we won. In fact, I may fire her up right now, as I’ve been replaying the BioShock series recently. It’s aged phenomenally in case you were wondering.

RELATED: Get Three Stackable PlayStation Plus Codes At A Massive Discount