Police Destroyed An Innocent Man’s House Hunting Down A Criminal, Court Tells Him To Pay For The Damages Himself 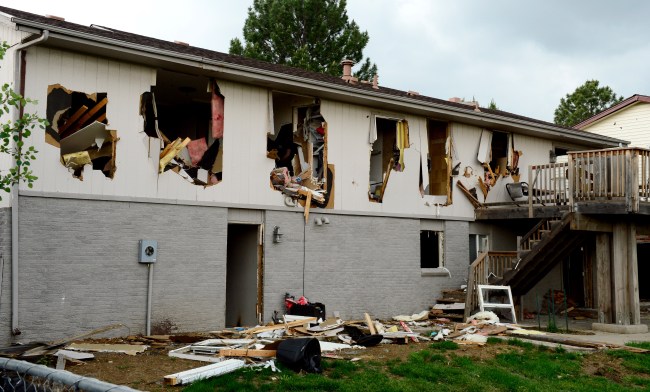 Is the city of Greenwood Village, Colorado owned by Comcast? Because that’s about the only explanation I can come up with for this story about the Greenwood Village police destroying the home owned by one Leo Lech and then the court telling him tough sh*t.

According to MSN, in June of 2015 an armed Walmart shoplifting suspect somehow barricaded himself inside the Lech’s house, leading to a lengthy standoff with police and the destruction of their home.

For 19 hours, the suspect holed up in a bathroom as a SWAT team fired gas munition and 40-millimeter rounds through the windows, drove an armored vehicle through the doors, tossed flash-bang grenades inside and used explosives to blow out the walls.

The suspect was captured alive, but the home was utterly destroyed, eventually condemned by the City of Greenwood Village.

That left Leo Lech’s son, John Lech — who lived there with his girlfriend and her 9-year-old son — without a home. The city refused to compensate the Lech family for their losses but offered $5,000 in temporary rental assistance and for the insurance deductible.

Now, after the Leches sued, a federal appeals court has decided what else the city owes the Lech family for destroying their house more than four years ago: nothing.

On Tuesday, a three-judge panel for the U.S. Court of Appeals for the 10th Circuit unanimously ruled that the city is not required to compensate the Lech family for their lost home because it was destroyed by police while they were trying to enforce the law, rather than taken by eminent domain.

The court also said the the Greenwood Village police were acting within their power when more than 100 officers from agencies around Denver destroyed the house because they can’t “burdened with the condition” that they have to pay for any of the damage they cause while enforcing the law.

“It just goes to show that they can blow up your house, throw you out on the streets and say, ‘See you later. Deal with it,'” Leo Lech told the Washington Post.

“Under no circumstances in this country should the government be able to blow up your house and render a family homeless,” Lech told NPR. “This family was thrown out into the street without any recourse.”

A spokeswoman for Greenwood Village told the Post that the Lechs were “very well insured” and that they refused the $5,000 assistance the city offered them for out-of-pocket expenses.

The man who barricaded himself inside the Lech’s house, Robert Jonathan Seacat, had stolen items from a local Walmrt, led to a high-speed police chase, and then a fire fight… over a shirt and two belts.

Lech says the cost to repair the house nearly $400,000 and that insurance did not cover the replacement of any of the home’s contents. He says he is now in debt today from loans he took out to pay for the repairs and replacements.

Melissa Gallegos, a spokeswoman for the city of Greenwood Village, said in a statement to NPR, “What Mr. Lech also failed to tell you was that he chose on his own to demolish the house rather than repair it, repour the foundation that wasn’t damaged and built a bigger better house where the old one stood.”

Lech’s attorney, David Williams, in a lawsuit filed in 2016, wrote “the interior of the Lech Home was a mass of debris and destroyed belongings from the projectiles launched into the home by the Defendants. Chemical munitions or other projectiles were stuck in the walls. The Lech Home was completely uninhabitable and its condition posed a danger to anyone entering the home.”

Lech say he is considering appealing his case to the U.S. Supreme Court.

“This has ruined our lives,” he said.