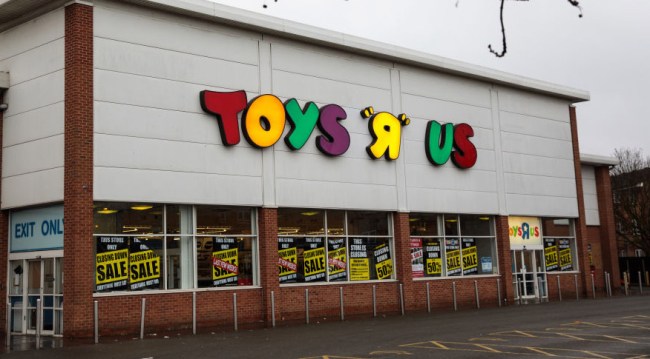 If you were like many people, you wondered just what was going to happen to all of those massive Toys ‘R’ Us stores once they were cleaned out and left to sit empty around the world.

Turns out that at least one group of people in London came up with a splendid use for the huge, empty store where people have gone for years when they don’t wanna grow up: a rave!

I mean, people in the United Kingdom have been throwing illegal raves in warehouses, fields and castles for years. Why not utilize this giant empty hulk of a building for a grand party?!

Unfortunately, the Hounslow Police of West London DO want them to grow up and shut down the festivites. Geoffrey would have been very disappointed.

#ResponseTeamC and #ResponseTeamB have disrupted an unlicensed music event in #Hounslow and five arrests made. #411TX pic.twitter.com/pwHbRxKCCA

According to Fox News, police said they seized a sound system at the scene of the “unlicensed music event.” They later tweeted out to potential ravers that they should not travel to the area “as all attendees and ticket holders are being turned away.”

Police have closed down an unlicensed music event on Bull's Bridge Industrial Estate, Hayes Road, UB2. Sound system has been seized and several arrests made. Do not travel to this area as all attendees and ticket holders are being turned away @metpoliceuk

Naturally, people on Twitter were very thankful that the police put an end to these shenanigans. Just kidding, they trolled them in typical internet fashion.

Thanks. Now I can sleep better at night.

It twas a #ToysRUs and then a rave broke out #evolution pic.twitter.com/s4jljBM9Ra

God forbid people have fun without someone profiting off of it.

Was it even worth the paperwork?

I like how they word it making it seem like something 'official' happened. Its just a party and pretty awesome that it was in a Toys R Us!