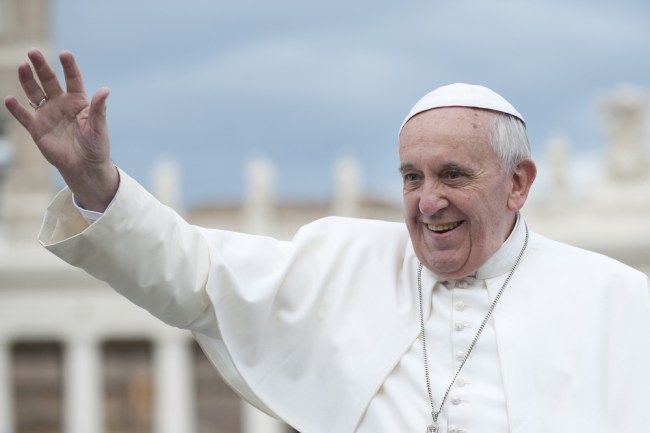 When you’re a priest meeting the Pope and you want to make sure that you definitely get into heaven, you’ve got to pull out all the stops. That means you’ve got to come correct and give His Holiness a bottle of 23-year-old Pappy Van Winkle bourbon. That’s exactly the ingenious gesture of supreme good will that Father Jim Sichko did last week when visiting Pope Francis at the Vatican.

Father Jim Sichko gifted the pontiff a 23-year-old bottle of Pappy Van Winkle bourbon which makes perfect sense since he is a priest from the Dioceses of Lexington, Kentucky. Father Sichko presented Pope Francis with the precious brown booze upon meeting him. “He knew I was from Kentucky,” Father Sichko said. “So when I handed it to him, he immediately said, ‘bourbon’ and I said, ‘yes,’ and then he said, ‘very good bourbon.’” Even the 81-year-old Argentinian Pope in Italy knows how incredible Pappy Van Winkle bourbon is.

The Pontifex has great tastes because a 23-year-old bottle of Pappy Van Winkle bourbon is in high demand and short supply despite retailing for several hundred dollars. Father Sichko just punched his ticket to the Pearly Gates and beyond.

But Father Sichko wasn’t done being the bourbon fairy. He gave away 10 bottles to the Pope’s security detail and other Catholic officials. The spread of booze included including Pappys, Four Roses, Knob Creek, and Woodford Reserve. The best part for Father Sichko is that he was given the alcohol by a member of the Van Winkle family.

All the PAPPYS, 4 ROSES and WOODFORD RESERVE made it to give to Pope Francis and his security detail! Thanks Be to God! pic.twitter.com/u7AJqpIl7B

Today I delivered a bottle of Pappys to the Commander of the Swiss Guard! We love and pray for all our Military and First Responders across the world! pic.twitter.com/AmQtBIUY1E

Father Sichko knew that the expensive bourbon was the gift to give, but it was a matter of getting his hands on the highly coveted spirit. Luckily for him, he had a friend who knows Julian Van Winkle and gave him cell phone number. Van Winkle sent him a few bottles and told Father Sichko, “Grazie, Father Jim, very cool. Well, we sure don’t need the publicity (not enough product) but this is awesome!!” Once again, it’s not what you know, it’s who you know.