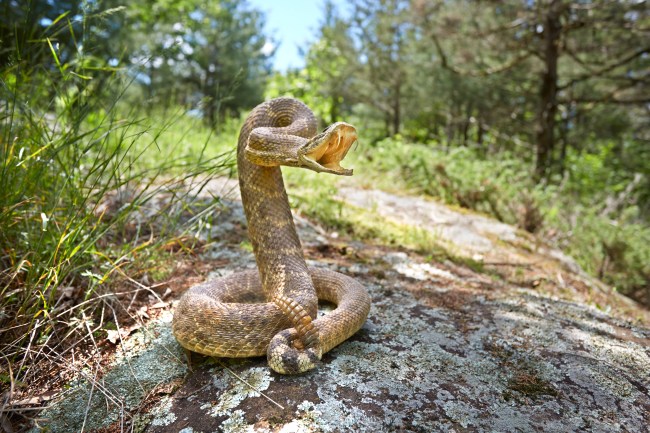 We grow up absorbing the information we’re told. When we’re young there’s no reason to believe that people are lying to us, or that the adults are wrong. We assume every adult is a repository of all the knowledge on planet earth and they can’t be wrong.

Then we grow up and realize that most people are full of shit and a lot of the things we’ve learned throughout our lives were lies told to us by adults in an effort to shut us up because we were young and asked too many annoying questions. Sometimes, as is the case below, these lies/myths can prove to be quite dangers.

There’s an AskReddit thread of popular ‘Survival Myths’ that are actually completely wrong and could prove to be dangerous and potentially cost you your life in a survival situation. Case in point, how to handle a venomous snakebite. I’ve pulled some of the most popular myths that are completely false (and dangerous) as well as the corresponding truths when that answer was provided in the AskReddit thread.

(Myth) Hamcnoo:
Sucking a snakebite, it will often make it worse
….
(How to actually handle a snakebite) SprogDeliveryUnit:
Australian doc here. There is so much misinformation on here!
What you want to do is stop the venom from travelling from the site of the bite, into the lymphatic system and then into the bloodstream.
DO NOT suck, cut, wash or otherwise investigate the wound. EDIT: Do not try to catch or kill the snake, identifying the kind of snake is NOT worth the risk of a second bite and the delay in getting to your other priorities.
Priority 1- get away from the snake.
Priority 2- get help. Get someone nearby to call an ambulance or worst case scenario call yourself. (EDIT: leaving this here because it’s hilarious)
Priority 3- stay still. Moving your muscles is what helps pump the fluid through your lymphatic system and to the lymph nodes, where it can enter the bloodstream quickest. Ideally keep the bite below your heart, but immobilisation is the most important thing.
Priority 4. If there is someone with you, get them to apply a pressure dressing to tightly compress the whole limb. This can greatly slow the flow of lymph and buy you hours.
The issue with a tourniquet (as opposed to full limb* compression) is that you’re not actually preventing the spread of lymph up the limb. Taking the tourniquet off then becomes very risky for a sudden influx of venom into the central circulation, and has serious risks of permanent damage and loss to the limb.

I feel like I’ve heard this one both ways depending on the type of wound.

yeahwellokay:
Removing a bullet is more dangerous than leaving it in. Trying to remove it can tear vital organs, it can be pushed in even deeper, or removing it can cause the person to bleed out.

The same can be true for ‘following the waves’

Ana_Litvi:
“Follow flying birds to find water” They can simply be flying to spend a night anywhere, so we can’t rely on them

MugglebornSlytherin2:
Closest I can think of is don’t brace yourself if you are about to get in a accident. Try to go limp, you’re more likely to walk away with minor injuries if you go limp. That’s how drunk drivers survive crashes

The chances of looking for a cactus to drink in a survival situation are slim but this is still helpful nonetheless.

ATinyLadybug:
One I know of is the myth that you can drink water from a cactus. I heard it’s false and you can only drink from a small minority of cacti without having certain health consequences I am not aware of.

Be safe out there.

ReaditAF97:
Don’t stand underneath doorways in case of earthquakes. Doors and door frames are just not made the same anymore, so you’re more likely to sustain more serious injuries if you do. You’re better off staying hidden underneath a desk or table.

Just avoid this altogether unless you’re a trained professional.

uhuhshesaid:
Rescue breaths are wildly overrated in most movies and TV shows. You’ll see someone in cardiac arrest, and the rescuer will stop giving compressions and focus on breathing into a persons’s mouth and BLAMO! Awake, alert, alive!
Nope. Don’t do that.
Your body does store a fairly decent amount of oxygen in its blood at all times. If someone in front of you OD’s and their mouth is covered with saliva/vomit or someone collapses in front of you of a suspected cardiac arrest your plan of action is 2 fold:
Are they breathing do they have a pulse? This is easy to fuck up especially in a moment of panic. My rule (as an EMS provider) is that if you don’t feel it in 10 seconds, it’s not there. Start compressions! If they are not in cardiac arrest they will let your ass know – and the law covers you under good-Samaritan clauses in most of these cases.
If you are the only person attending to this body – do not stop and give rescue breaths if help is on the way and will be there soon. It takes about 4-7 decent compressions to get blood recirculating in the body after stopping to give mouth-to-mouth. That’s a lot of blood, carrying a lot of vital oxygen reserves, that aren’t making it to the brain. Obviously if you’re a long way out from help, and you feel safe to do so, give rescue breaths. But it should NEVER be priority #1.
BTW if you hear ribs crack, make a face, make vomit noises if you have to, tell the person their bones are fucking grossing you out, but don’t stop compressions. Because what are compressions? That’s right. They are number fucking one.

Also, try to avoid drinking river/pond water if you can because you never know what parasites are lurking.

afsoon01
I can think of multiple, basic wilderness survival is required to be taught where I live!
– don’t drink your pee if you’re thirsty. It’s high in salt and will make you MORE dehydrated, just like ocean water.
– eating snow when your thirsty is also bad- it lowers your core temperature and you can become hypothermic.
– don’t Play dead with all bears. Depends on the bear- some will definitely fuck your shit up if you play dead.
Grizzly bears- stand your ground and back up slowly, if it becomes irritated get into the fetal position and cover your neck and play dead.
Black bears- throw rocks and sticks at it, and make a LOT of noise. From my experience, black bears are skittish and run away.
Polar bears- back away slowly to safety, if they attack pray they kill you fast defend yourself by any means necessary
Remember to always carry bear spray or a gun if you’re in bear country

You might feel more comfortable but you certainly won’t be warmer.

NZT-48Rules:
Drinking alcohol to stay warm. You sweat, your blood will rush to your skin and you will freeze/die much faster.

GR33NB4N4N4S:
Apparently, some people think the best way to survive a wolf attack is to bend down and show the wolf you’re submissive towards him and pose as no threat.

If you do this, you’re dead. The wolf will 100% kill you. Your best bet is to walk away WITHOUT TURNING YOUR BACKS ON THEM, maintaining eye contact the whole way. If you look away or turn your back the wolfs killer instinct will kick in and it’ll kill you. Don’t make a lot of noise and aggressive movements towards a wolf the same way you’d do to a black bear because most likely it’ll be seen as a challenge, not a threat.

quokkafarts:
If you ever find yourself in snake country, make as much noise as possible. Most people want to avoid snakes so stay quiet, but they are more scared of you than you are of them. Talk loudly, stomp, but obviously keep an eye and ear out for any fellas who don’t want you to be there.

schnit123:
Trying to outrun a tornado is about the worst possible thing you can do in a tornado situation. Take shelter: get underground, go into an interior room, lay in a ditch while covering your head if you have to. Tornadoes are basically like three year olds throwing temper tantrums except instead of toys its cars, buses and trains they’re throwing around (but also toys too, which they can throw hard enough to literally pass through your body). A vehicle of any kind is about the last place you want to be when a tornado comes through.

This one seems obvious to me having grown up in Florida. Cotton is the absolute worst possible fabric in hot/humid conditions.

Suicidalsidekick:
“Cotton wicks moisture.” Cotton is probably the worst material to wear in an outdoor survival situation because it holds moisture and in doing so loses its ability to keep you warm.

slenderman123425:
You do not need to wait 24hrs to report a missing person. If you think someone is missing report it as such. The faster a missing person report is filed the greater the chance the person will be found

Hydron11:
If you get stabbed with anything, don’t pull it out since it could be the thing that prevents you from bleeding out. Instead, immobilize it and go to the hospital where they can stop the bleeding when they remove the object.

I’ll wrap it up with this one since I’ve seen countless videos like this throughout the years.

-eDgAR-
I watch a lot of fight videos on subs like /r/streetfights and /r/fightporn and one of two things pretty much always happens when someone gets knocked out: Either their friends come and try to pick them up, shake them, and slap them on the face to regain consciousness or they are left there on their back while people film and laugh and say, “You got knocked the fuck out!”

These are both bad things to do because that person has just suffered possible serious trauma to their head, especially if they smacked it on the pavement when they came down, so shaking them awake is not a great thing to do. It might seem like leaving them be and recover on their own is a better idea, but it’s not always because they run the risk of choking on their tongue.

The best thing to do is put them in the recovery position which will make sure they don’t have problems breathing until they regain their bearings and if they don’t after a while, it’s a safe way for them to be until medical help comes.

There are a lot more of these pervasive survival myths over on the AskReddit thread so you can click here if you want to keep on reading.

And if you happen to have any that you’d like to add to this thread you can hit me up on Twitter at @casspa and if it’s good enough I’ll add it here.