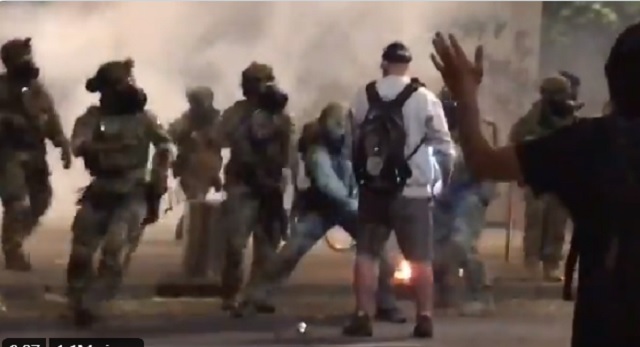 The protests in Portland have escalated this weekend and we’re beginning to see some wild footage from reporters on the scene.

On Saturday night, protesters in North Portland lit the Portland Police Association building on fire which led to the police declaring a riot in an effort to disperse the crowd.

During protests on Friday night, Portland officers and other law enforcement officers, including those from federal agencies, worked together to respond to disperse crowds, Portland police said in a statement. The federal officers worked under their own supervision and direction, according to the statement.

As the police tried to disperse the crowd, one man wearing a Navy sweater stood in their way. The man was hit several times by police using their batons and he didn’t even seem fazed by it at all.

Apparently the man was taken to an ambulance and may have a broken hand.

He’s ok, we got him to an ambulance that took him to the hospital. This is one badass guy!! #PortlandProtest #DefendPDX https://t.co/UGXP30CvGa

I’m the medic who took him to meet an ambulance, this guy is so badass, honestly I think he was calmer than I was. Looks like a broken hand, won’t say more for his privacy. 🖤#PortlandProtest https://t.co/4871dKn8SR