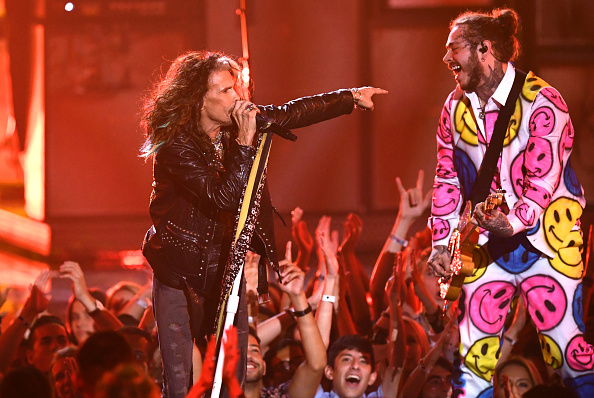 Post Malone‘s private plane blew out its tires during takeoff and was forced to make an emergency landing. The private jet took off from Teterboro Airport in New Jersey on Tuesday morning, but two tires blew out during takeoff. The plane was headed to London, but was rerouted to Massachusetts where it has landed safely.

UPDATE: At 3:45 PM, the Gulfstream Aerospace GLF-4 that was carrying Post Malone and 15 other passengers landed safely at Westfield Barnes Regional Airport in Massachusetts

Post Malone's plane has landed safely. That is…if this is actually his plane….no one knows pic.twitter.com/0lB1qoWKi0

The FAA released a statement: “A Gulfstream Aerospace GLF-4 aircraft blew two tires as it took off from Runway 24 at Teterboro Airport in New Jersey about 10:50 a.m. today. The aircraft was heading to London Luton Airport in Luton, England.”

The Gulfstream G-IV with blown tires continuing to circle, reducing fuel weight prior to landing. Per @TMZ Post Malone is reportedly on board this aircraft.

The update at 2:39 PM EST: “SWF tower advising that Gulfstream with blown tires will continue holding for approximately 45 more minutes before landing.”

The 23-year-old rapper’s plane had circled in the skies near New York City for 30 minutes, but air traffic controllers rerouted the plane. The private jet will attempt an emergency landing at Westfield Barnes Regional Airport in Massachusetts. You can follow the plane’s movement on Flight Radar.

TMZ posted a video of emergency crews preparing for the landing.

You can listen to the conversation between the pilot and an air traffic controller at TMZ.

BREAKING: @TMZ is reporting that the private plane with 2 blown tires from #Teterboro is that of rocker Post Malone. The plane is reportedly intentionally burning fuel for an attempted landing in Massachusetts. MORE: https://t.co/JxzueNqcwf pic.twitter.com/W2EYcPObMf

Post Malone appeared on the 2018 MTV VMAs on Monday night with Aerosmith.

This is a developing story and we will update when new details become available.

RELATED: Post Malone Brought The Undertaker On Stage To Chokeslam Him And Smash Guitars During His Show

RELATED: Post Malone Just Shattered A Record Held By The Beatles For 54 Years