Check Out The Insane Process Michael B. Jordan Went Through To ‘Scar’ His Body For ‘Black Panther’ 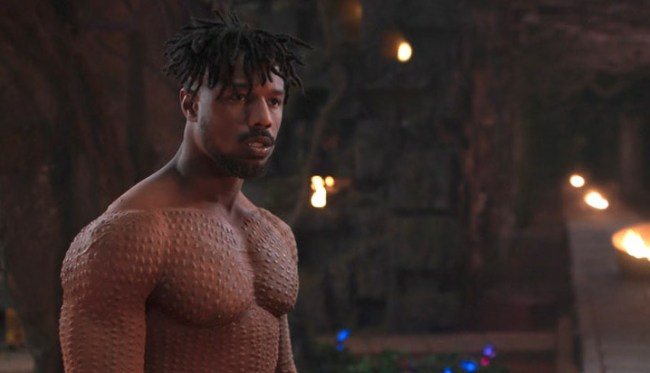 If you were like me, one of things you had a question about after watching Black Panther was “How did they make it look like Michael B. Jordan had all those scars on his body while he was playing Eric Killmonger?”

I mean, was he just wearing a skin-tight green shirt that they digitally altered to add the scars later on in editing? Or was it some kind of ridiculously time-consuming prosthetic process that he had to undergo to gain that appearance?

Turns out it was, in fact, the latter, as Jordan did have to undergo a crazy process that took several hours to apply 3,000 prosthetic dots all over his torso and arms.

“I waited my entire life for this.” #BlackPanther

“It took a few hours – we did prosthetics. So in the morning I would come in and get those put on, and then at night… it’s like glue. They glue, and put ’em on, and a sealer and a whole bunch of other stuff. And they would put me in a sauna to kind of help sweat it all off at night. So it was a long process, but it was definitely worth it.”

In the film below, we get to see how makeup artist Joel Harlow created Killmonger’s hashmarks and the painstaking process of applying them to Jordan’s body.

We also get to see that Michael B. Jordan has WAY more patience than I have because I would have been going batshit sitting in a chair having this done to me for hours at a time.

“I’m just getting started.” Get your tickets NOW to see #BlackPanther: [link in bio]