Professional Chef Cooks A Steak In A Toaster, Says It Came Out Perfect, No One Believes Him 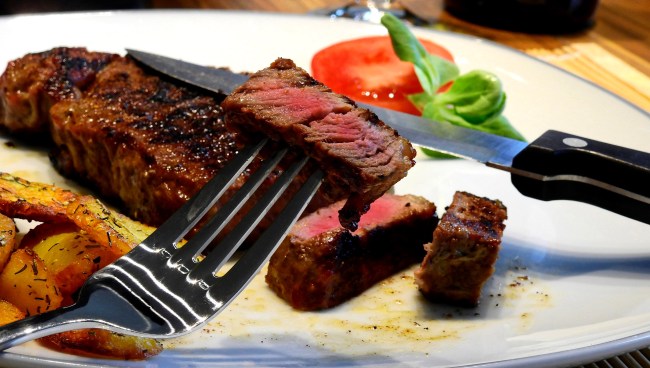 Back in November of 2020, poeple on the internet were left horrified when a girl on TikTok cooked a perfectly good steak in a toaster.

Obviously, this was a crime against humanity that had to violate more than a few laws. And if it didn’t, it should have.

That was the typical reaction to someone cooking a delicious, juicy steak in a freaking toaster.

Professional chef Craig Harker, however, was not one of those people who reacted that way.

Instead of filing some sort of injunction against the TikToker to prevent her from ever cooking anything ever again, he decided to try it out for himself.

In fairness, I don’t know that he saw the same video I am talking about here, but he does admit to the Mirror that he saw some video online of someone cooking steak in a toaster, and so even if it’s not the same video, my outrage still stands.

Harker, 33, purchased a cheap toaster for this test figuring he would probably ruin it because YOU’RE NOT SUPPOSED TO COOK A STEAK IN A TOASTER.

After seasoning his steak in the usual manner, Harker then deposited the meat into the toaster and let it cook until it was medium rare.

Here comes the part almost no one believes. He tasted it and claims it was just as good as if he had cooked it in the correct fashion.

“I had seen it online and thought there is no way you can cook a steak in the toaster so I had to try it out for myself because I know how to cook a good steak,” said Harker.

He ended up having to cook three different steaks in the toaster before he says he got it right. So he basically ruined two perfectly good steaks attempting this criminal experiment.

“It was trial and error but when we put the third steak down, it came out medium rare and was pink in the middle but well done on the outside,” he said.

“It tasted really nice and was red hot; if someone doesn’t know how to cook a good steak just whack it in the toaster.”

Wisely, Harker strongly suggested that no one actually try cooking a steak in a toaster at home because of, you know, the significant fire hazard.

“I didn’t expect for it to work at all,” Harker admitted. “You always see these videos floating about online but I was shocked that it came out restaurant quality.”

Either he is the greatest cook ever or his idea of “restaurant quality” is far different than mine.