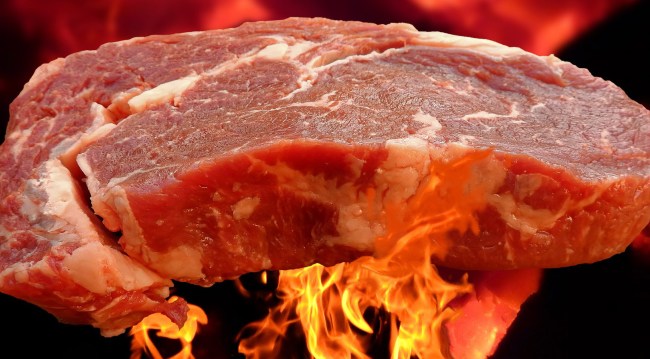 There are various levels of wrong in society. For example, eating the last slice of pizza without asking if anyone else wants it. People can forgive something like that. On the other hand, cooking a delicious, juicy steak in a toaster? That is something that simply will not stand.

Of course, no one would ever do such a thing, right?

Wrong, as thousands of users of TikTok found out recently when someone with the handle @itsmeju1iette posted a video of herself “cooking steak for my boyfriend” … in a toaster.

Watch as she places two perfectly good steaks into a toaster and presses the lever to begin “cooking” them.

Then, just to make matters somehow even worse, which, really, seems like it would be impossible, she slathers the poor unseasoned steak with about a quart of sauce.

If you thought what she did there was an unforgivable food offense, you’re not alone.

The video has now been watched an astounding 10.8 MILLION TIMES.

“I just watched a crime happen,” wrote one viewer.

“I am physically upset,” wrote another.

“HOW DO YOU WASH THE TOASTER AFTER THATS RAW MEAT,” reads another comment.

“Please never do that again,” begged another.

Of course, this is the same person who, after a quick look through her videos also made spaghetti and metballs in a coffee pot, cooked a hamburger on an iron, popped popcorn with a hair straightener, and put hot dogs in a dryer.

She obviously knows what she’s doing as though, she’s only posted 11 TikTok videos and the lowest amount of views any of them have gotten is 104,000 with five of them going over a million.

People love to be outraged and she’s obviously tapped into it very well.