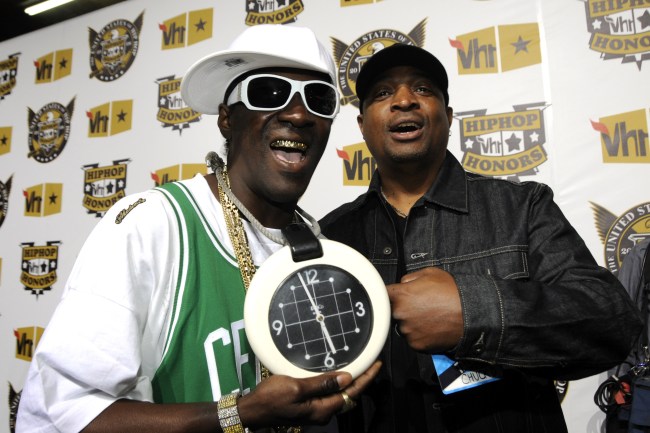 Public Enemy has officially fired Flavor Flav from the group due to a spat that involved Democratic presidential nominee Bernie Sanders.

“Public Enemy and Public Enemy Radio will be moving forward without Flavor Flav,” the hip-hop legends said in a brief statement Sunday. “We thank him for his years of service and wish him well.”

Flav, had been with the group for 37 years, was angry that Public Enemy was performing at a Bernie Sanders rally on Sunday and sent a cease-and-desist letter to the Sanders camp over the weekend.

“The continued publicizing of this grossly misleading narrative is, at a minimum, careless and irresponsible if not intentionally misleading,” t “Flav is reaching out, not in the spirit of division, but for the sake of unity in the hope of preserving the integrity of the Public Enemy Movement and the faith and trust his millions of fans around the world have placed in him.”

Before the group fired Flav, Chuck D’s lawyer reiterated that Chuck is the sole owner of the Public Enemy trademark and could do as he pleases.

“From a legal standpoint, Chuck could perform as Public Enemy if he ever wanted to; he is the sole owner of the Public Enemy trademark. He originally drew the logo himself in the mid-80’s, is also the creative visionary and the group’s primary songwriter, having written Flavor’s most memorable lines.”

Public Enemy eventually did perform at the Sanders rally on Sunday without Flav.

Nothing to see here, just 35,000 ppl at a public enemy Bernie rally. Join us in this incredible movement! We can fight the power together. Power to the people! #FightThePower #PublicEnemy #PeteButtigieg #WarrenDropOut #BernieInLA #BernieSanders #bernie2020 pic.twitter.com/pT9bkXQm97