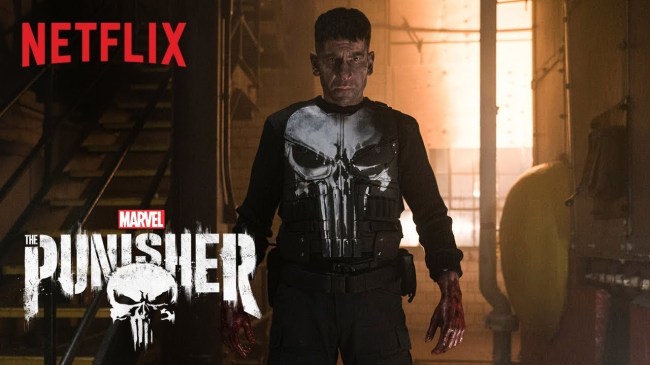 With all the news about Netflix’s other Marvel shows like Daredevil, Luke Cage and Iron Fist being cancelled, many people are eager to see what the second season of The Punisher has in store when it premieres on Friday, January 18th.

Will the show’s sophomore season be good enough, and more importantly, draw enough eyeballs to save it from the same fate?

According to the first early reviews, the answer to that is… maybe, but it’s doubtful.

There are many positives sited, mostly the work of star Jon Bernthal and the amazing action scenes, but there are also enough negatives, the slow pace, a so-so narrative, that it’s unlikely Frank Castle will live to see another day on Netflix once season two concludes.

“It’s too long and doesn’t have enough story to adequately fill 13 hours of television. The many pieces of the puzzle also don’t start coming together until far too late in the game as a result, and by that point, it’s rather hard to care.” – TV Guide

“After 11 seasons of Marvel’s Netflix franchise, fans know what to expect. The Punisher offers decent action scenes and a great lead actor, and the same level of okay-to-boring crime drama storytelling we’ve seen throughout the franchise. If you enjoyed season 1 you’ll be perfectly happy with this addition, but it doesn’t do anything interesting with a character who should feel more relevant to our current political climate.” – The Daily Dot

“If The Punisher follows suit with the rest of the Marvel Netflix series (only Jessica Jones has yet to be canceled), this will be the last we see of him on the streaming service. It’s a shame such a wild and impulsive character is likely going out on such an underwhelming note.” – The AV Club

“The Punisher Season 2 is a lot of fun — really violent, excessive fun. Your mileage may vary. But there’s also no denying that this time around, The Punisher has swapped bullets for brains, leaning into easy entertainment over meaningful narrative.” – Collider

“The Punisher Season 2 delivers what I want out of all of these Marvel shows – a familiar character dealing with new and exciting threats in a serialized story. That may sound basic, but it’s a feat that many shows on TV, Marvel and Netflix series included, aren’t able to accomplish.” – Den of Geek

“It’d be unfair to say that this season was ‘better’ than the last or vice-versa because again, they’re just…different. It’s a move for the show that gives you the sense that, at one point in time, Netflix might have really had plans to see Frank even further transformed or made over into a more heroic character farther down the line.” – Gizmodo

“This season of Punisher is a perfect example of what happens when you pay true honor to the source material you’re adapting. While there are season one threads that certainly bleed into this one, none of them are done so in a way so as to say ‘this is a continuation of the last story.’ No, Season Two is a whole new Frank Castle adventure and all the better for it.” – Forbes

“The Punisher Season Two is, without a doubt, Marvel Netflix’s best sophomore season yet, narrowly edging out the deep crime drama of Luke Cage Season Two. Showrunner Steve Lightfoot clearly heard the fan reaction to the first season and made sure to preserve and develop what worked while cutting away or streamlining what didn’t.” – ComicBook.com

“Season 2 is a fine new entry in the old man/young sidekick drama, a prestige genre exhibited by works like Lone Wolf & Cub, Road to Perdition, Logan, and The Last of Us. The Punisher is Marvel’s Léon: The Professional: Whigham is a Gen-Z Natalie Portman and Bernthal an ooh-rah reboot of Jean Reno’s killer sophisticate. It’s just great.” – Inverse

I think “just about satisfies expectations” sounds like the general consensus here. Nice knowing you, Frank.

Former marine-turned-vigilante Frank Castle (Jon Bernthal) has been living a quiet life on the road until he suddenly becomes embroiled in the attempted murder of a young girl (Giorgia Whigham). As he is drawn into the mystery surrounding her and those in pursuit of the information she holds, Castle attracts a new target on his back as new and old enemies force him to confront whether he should accept his destiny and embrace a life as The Punisher.