Quentin Tarantino Reveals The Plot Of ‘Double V Vega’, The ‘Pulp Fiction’ Prequel That Never Was 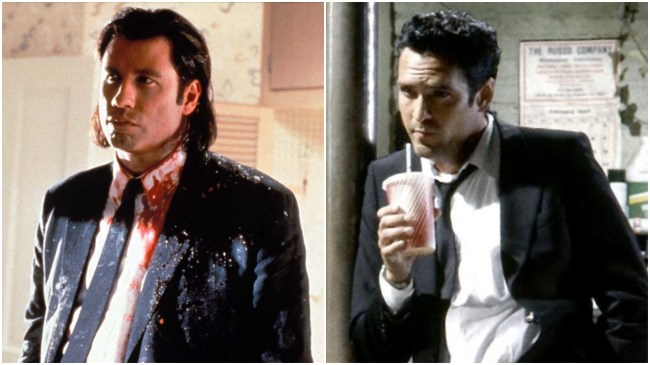 Of all the rumored Quentin Tarantino movies throughout the years — from an R-rated Star Trek to a third Kill Bill — the one that’s always been most intriguing is a Vega brother spin-off.

The Vega Brothers — Vic and Vincent — are the black-tie-white-shirt-donning cold-blooded killers from Tarantino’s first two major hits: Reservoir Dogs and Pulp Fiction. And ever since their creation, Tarantino has mulled ways to get them together in a film.

Alas, the Vega Brothers spin-off never came to be, as Tarantino has spent the years since repopularizing Westerns (Kill Bill), rewriting history (Inglorious Basters, Django Unchained), and reliving his childhood (Once Upon a Time in Hollywood).

But just because it never happened doesn’t mean the idea was swept under the rug never to be mentioned again, as Tarantino — who also revealed he’s had recent discussions with Uma Thurman about a potential third Kill Bill — recently discussed the title and the premise of the film while on the ReelBlend podcast.

When asked about how far into the process of conceptualizing the film he got, Tarantino — who quickly notes that it would have been titled Double V Vega — said he definitely knew the film’s overarching premise:

“Yeah, that’s the only thing I did know was the premise, per se. I don’t think I took it far enough for a story but I had a premise. It would have taken place in Amsterdam, so it would have been during the time that Vincent Vega (John Travolta) was in Amsterdam.

Remember, in Pulp Fiction he’s just come back from Amsterdam and he’s telling the whole story. He was like running some club for Marsellus (Ving Rames), and so he was probably there for like a couple of years.

So at some point, in his two-year stay in Amsterdam running some club, Vic (Michael Madsen) shows up to visit him. And it [the film] would have been about their weekend.

Exactly what happens to them or what kind of trouble they get into, I never took it that far, but it definitely would have taken place in Amsterdam and it would have been Vic visiting him.” [CinemaBlend]

Unfortunately for Tarantino fans, the film will never happen, because unlike Martin Scorsese, the iconic director has no interest in using de-aging technology, saying that this idea had a “shelf life.”

Quentin Tarantino’s ninth feature film, ONCE UPON A TIME IN HOLLYWOOD, hits theaters this Friday, July 26.