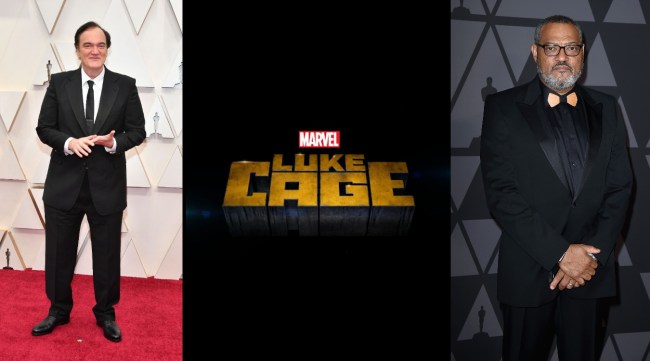 As Quentin Tarantino marches towards his tenth (and supposedly final) film, fans of the legendary auteur remain desperate to get an idea of what type of project the acclaimed director will tackle.

For some time now, there has been speculation that Tarantino will jump to an intellectual property for the first time ever, as there have long been rumors about a Star Trek script that he’s been working on.

Making a Star Trek film would certainly represent a change of pace for the mind behind Once Upon A Time In Hollywood, as he’s never dabbled in massive franchise filmmaking before. Apparently, though, he once almost did, as he recently revealed there was a point where he almost made a Marvel film.

On a recent episode of Amy Schumer’s 3 Girls, 1 Keith podcast, Tarantino revealed that not only has he always wanted to make a Luke Cage movie, but he actually came close to making one with none other than Lawrence Fishburne:

“Growing up I was a big comic-book collector, and my two favourite [comic books] were Luke Cage: Hero for Hire, later Luke Cage: Power Man, and Shang-Chi: Master of Kung Fu.”

“What dissuaded me … was my comic-geek friends talked me out of it,” Tarantino went on. “Because I had an idea that Larry Fishburne would’ve been the perfect guy to play Luke Cage. But all my friends were like, ‘It’s got to be Wesley Snipes.’ And I go, ‘Look, I like Wesley Snipes, but Larry Fishburne is practically Marlon Brando. I think Fish is the man.’ And they’re like, ‘Yeah, but he’d have to get in shape in a big way. Snipes is that way already!’ And I go, ‘F*ck that! That’s not that important! F*ck you, you ruined the whole damn thing!’”

While the idea of a Quentin Tarantino-helmed comic book movie sounds absolutely incredible, I highly doubt it’s something we’ll ever get to see, especially when considering the uber commercialization of the Marvel Cinematic Universe. Fingers crossed he reneges on his 10 film promise and continues to churn out original ideas for years and years to come.