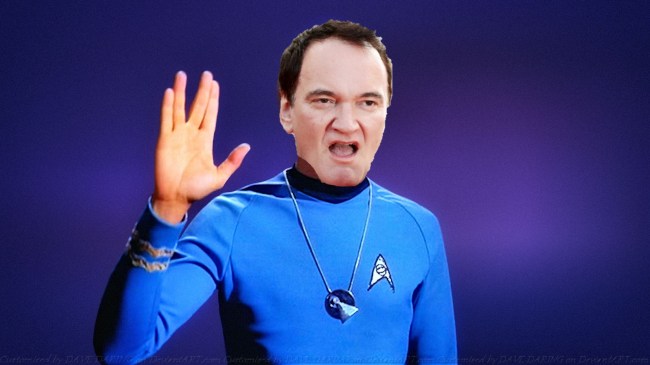 If we’re meant to take Quentin Tarantino at his word, then that means the modern-day legend only has one more feature film to go until he arrives at his self-imposed limit of ten directorial efforts. As for why one of the world’s greatest living directors wants to deprive us of his talents, I’ll never know, but the fact remains that Tarantino’s transition into something other than movies remains a very real possibility as this point.

Given Tarantino’s legendary list of unmade or in-development films, the content of his 10th feature film has been a topic of discussion amongst fans ever since Once Upon A Time In Hollywood premiered last summer, with the most interesting of those potential projects being Tarantino’s long-rumored Star Trek film, which would mark the first time that the Pulp Fiction auteur ever helmed a true big-budget blockbuster.

While specifics about Tarantino’s Star Trek pitch have been kept in the dark, a recent report from Deadline has shed some light on what that film may look like, describing it as a “1930s gangster” film.

Deadline’s report reveals Tarantino’s movie “is based on an episode of the classic ‘Star Trek’ series that takes place largely earthbound in a 1930s gangster setting.”

The episode in question is most likely “A Piece of the Action,” the 17th episode of the second season of “Star Trek: The Original Series.” The installment aired January 12, 1968 and found the Enterprise crew visiting a planet with an Earth-like 1920s gangster culture. That Tarantino’s “Star Trek” idea was a gangster movie isn’t too surprising, as the filmmaker revealed in an interview with Deadline in July 2019 that his plan for “Trek” was to bring in some “Pulp Fiction” elements.

“I don’t know if I’ll do it or not,” Tarantino said at the time. “I’ve got to figure it out, but Mark wrote a really cool script. I like it a lot. There’s some things I need to work on but I really, really liked it.” [via IndieWire]

As bizarre and enjoyable as that may sound, the latest rumors seem to indicate that Tarantino is walking away from his Star Wars project, as he told Consequence of Sound back