Quibi Is Pissing Away Comical Amounts Of Money 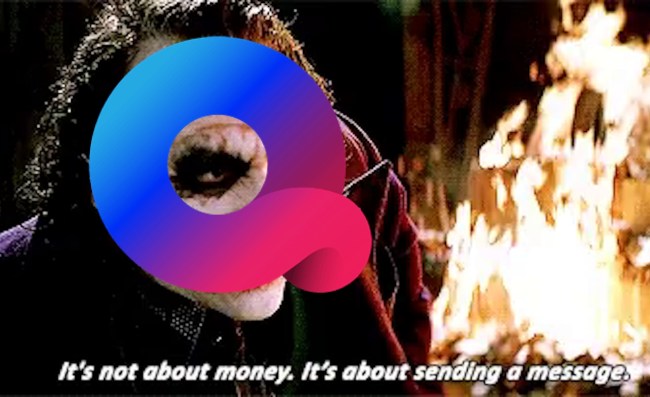 I don’t want to be mean to a failing business in the middle of a historic pandemic. If this were a Mom and Pop shop, an article dunking all over its forehead would be a non-starter.

But when it comes to self-important Silicon Valley suckers linking up with out-of-touch Hollywood hotshots to needlessly piss away billions of dollars for a patently awful idea, it’s fair game. This brings us to Quibi, the short-form streaming service that has been nothing short of a colossal failure thus far.

The folks over Quibi — which is short for, I shit you not, “quick bites” — apparently didn’t realize that, quarantine or not, literally not a soul is looking for 10-minute episodes of content that can only be streamed on your phone.

“Hey, let’s take our content and make it as difficult and as tedious to watch as possible! Want to have the use of both hands? Too bad! Just starting to get into an episode? Guess what? It’s over!”

Unsurprisingly, Quibi has had a disastrous start thus far, with the app “falling out of the list of the 50 most downloaded free iPhone apps in the United States a week after it went live on April 6,” according to the New York Times. Scrolling through the app store this morning, I didn’t even see Quibi in the Top 200. Folks, I’m no technology journalist, but that sounds like BYT (Big Yikes Territory) to me.

To make matters worse, the company’s founder, Hollywood power producer Jeffrey Katzenberg, made an ass of himself in that same NYT article, where he *literally* blamed all of the companies failures thus far on our current global situation.

Now, over two months since the app’s release and the prospects have absolutely not improved for the failed startup, as a recent Wall Street Journal piece has outlined just how biblically Quibi is pissing away cash.

– The app raised $1.75B in funding and is expected to spend $1 billion by October.

– App fell out of top 50 on Apple store charts just 2 weeks after launch.

(via The Wall Street Journal)

Like I said, Big Yikes Territory. But that’s showbusiness folks – some people make it and others piss away a billion dollars by trying to make a streaming service for ants.

RELATED: For Some Reason, People At Quibi Are Mad At Being Laid Off While The Company Pays Reese Witherspoon $6 Million