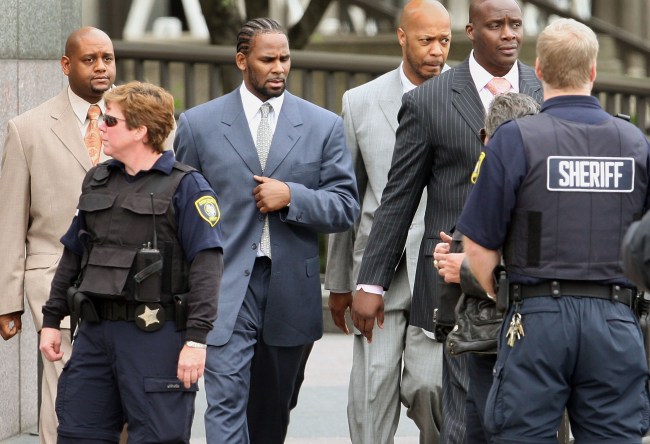 Singer R. Kelly was charged with 10 counts of aggravated criminal sexual abuse in Cook County, Illinois on Friday. The charge is a class 2 felony in Illinois, and each charge carries a maximum sentence of 3 to 7 years in prison.

This comes a week after lawyer Michael Avenatti reportedly handed over a sex tape involving the R&B star. The girl seen in the 45-minute VHS video is allegedly 14. A grand jury has since investigated the alleged sex tape and a dozen women have testified against Kelly. “My client knows the identity of the girl and R. Kelly. He identified the two of them on the videotape,” Avenatti told CNN last week. “He worked for and has known R. Kelly for decades and he met the girl on a number of occasions.”

Kelly is under investigation by at least three different federal law enforcement agencies. The FBI, Department of Homeland Security and the IRS have each opened investigations into Kelly in recent months. As many as a dozen women have come forward to testify against Kelly for sexual abuse crimes that have occurred over two decades. According to court records, R. Kelly’s first court date is listed as March 8.

The accusations against one of the top-selling recording artists of all-time grabbed headlines recently because of the popularity of Lifetime’s six-episode documentary series Surviving R. Kelly. The documentary sparked protests against the well-known R&B singer. The #MuteRKelly campaign went hard against RCA Records who had a contract with Kelly up until they dropped him from the label last month. Fellow music artists who have collaborated with Kelly in the past such as Lady Gaga, Chance the Rapper, Celine Dion and Phoenix have condemned the singer and even pulled their collaborations with the Ignition singer.

Several women who claim to be victims of R. Kelly appeared on Dateline’s Accused: The R. Kelly Story in January. The women allege that R. Kelly abused them mentally, physically, and sexually. One of the accusers who appeared on the show claimed that she has DNA evidence of being with the singer when she was a teenager.

Jerhonda Pace alleges that she had a sexual relationship with R. Kelly in 1999 when she was 16-years-old. Pace claims that she has DNA evidence of the inappropriate relationship because she has a blue t-shirt which has Kelly’s saliva and semen on it.

The 52-year-old singer has repeatedly denied all sexual abuse accusations against him. “[Kelly] never knowingly had sex with an underage woman, he never force anyone to do anything, he never held anyone captive, he never abuse anyone,” his lawyer, Steve Greenberg, told The Associated Press last month.