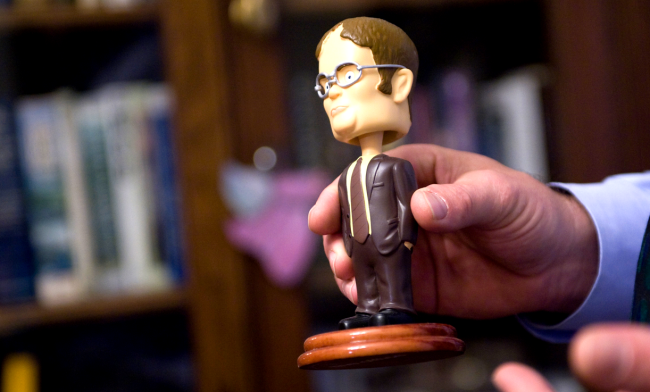 One of the most popular sitcoms of all time (if you count the Netflix years), The Office, featured a stellar cast of both characters as well as actors.

From Steve Carrell as the inept boss Michael Scott and John Krasinski as everyman Jim Halpert to Jenna Fischer as lovable secretary Pam Beesly and Rainn Wilson as office suckup Dwight Schrute, there was never any shortage of laughs on The Office.

The show went off the air on May 16, 2013, but lives on today thanks to streaming services like Netflix and Peacock, generating new fans by the day and making many viewers wish the show was still actively in production.

If it were, though, what on Earth would Mike, Dwight and the gang even be up to these days?

That question was posed to Rainn Wilson last week by Gizmodo as part of a promotional tour for the new film Jerry & Marge Go Large, starring Bryan Cranston and Annette Bening.

As for Dwight Shrute, who Wilson knows better than anyone, he said, “He’s probably figuring out ways to make the farm more profitable, probably a Schrute Farms roadside stand with the money beets on top. I think that he is a capitalist, so he would have bought a lot more buildings in and around Scranton.”

Wilson also thinks the power-hungry Dwight might also be looking for new ways to lord over his fellow man by running for office on “maybe a Flat Earth right wing ticket, running for some kind of city council seat in Scranton.”

Sounds about right, but what about Dwight’s boss, Michael Scott? That depends on how much of Dunder Mifflin’s work is now, in 2022, done from home.

“It would be very funny to see Dunder Mifflin as a remote, hybrid workplace,” said Wilson. “An entire episode of The Office that was on Zoom? That would be pretty cool.”

Cool for everyone but the boss.

“I think if Michael was still at Dunder Mifflin he would definitely be wanting people to come back into the office no matter what,” Wilson said. “He’d be showing up at people’s houses, he would just want people around desperately. He would get really depressed in his condo, on Zooms and not being able to connect to people.”

That, like pretty much all of The Office episodes, is definitely something we would want to watch.