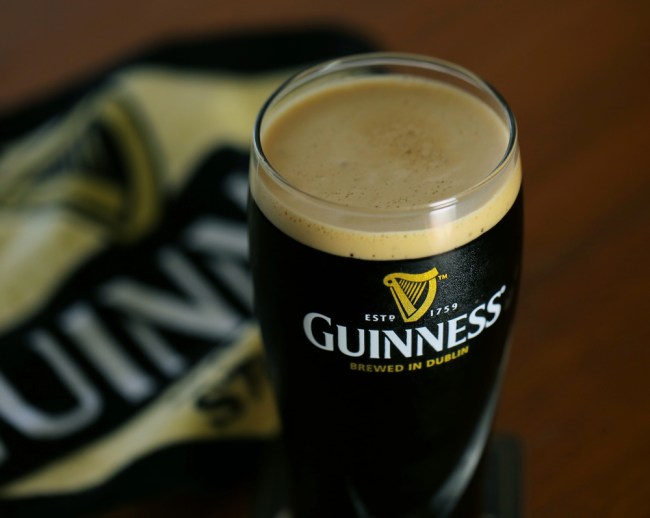 Guinness has been one of my favorite beers on the planet for as long as I’ve been drinking beer. One of the things I love the most about Guinness is they absolutely OWN their market. So much so that they’ve actually transcended the type of beer (stout). When you go out to drink a stout or pick up some at the store then 99 times out of 100 it’s going to be a Guinness. It’s not only the best-tasting stout on the planet it’s the stout beer that you can find everywhere, and I mean everywhere.

Like every Guinness lover who traces even the tiniest sliver of ancestry to Ireland, I’ve always dreamed of visiting the Guinness factory. Last week that dream became a reality, and I hopped on a plane and flew over to Dublin where I was able to tour the St. James Gate Storehouse, meet with an archivist from Guinness and go over historical artifacts from the Guinness vaults, and tour the Open Gate Brewery where Guinness brews their new-age experimental beers.

Between the tours and soaking up all the history, I could find in Dublin I spent every waking minute in a pub getting to know the Dubliners who were all comically nice and welcoming. You might’ve caught some of my adventures in Dublin on the @BroBible Instagram last week (or on my @casspa Twitter). Throughout my peregrination of Dublin, I was inundated with some random facts about the history of Arthur Guinness, St. James Gate, and Guinness Beer which I wanted to share with all of my fellow Guinness-loving bros out there. 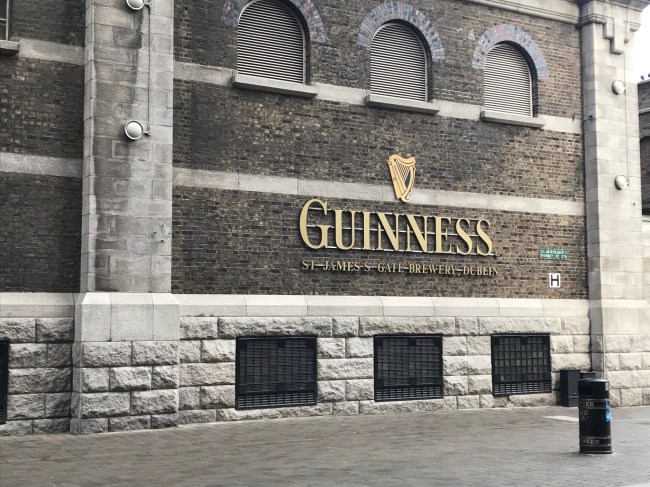 I didn’t want to do this as a formal listicle and throw random facts at you like a teacher. Instead, I thought it would be cool to share some of the fascinating @GuinnessUS trivia I picked up on my travels alongside some random photos from my trip.

When I arrived at the St. James Gate Storehouse where visitors take the Guinness tour I met with a member of their archivist team. He’d pulled a few artifacts from their vault for me to look over. One of those artifacts with the lease which Arthur Guinness, the founder of Guinness, signed back in 1759. This isn’t the original lease because they keep that in a vacuum-sealed and climate controlled room, but this is the oldest copy and the same one they show the living members of the Guinness family when they come to visit the factory and Storehouse: 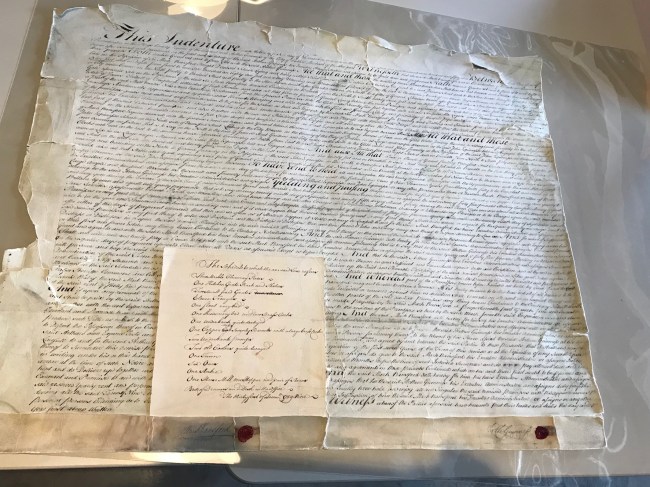 Arthur Guinness signed a 9,000-year lease for his brewery at St. James Gate back in 1759. That means there are 8,742 years left on the lease (it will be 8,741 years on January 1st). That’s 454,584 WEEKS left on the lease, or 3,190,830 days left. Having lived in NYC for a decade where 1-year leases are the norm, the fact that someone would ever give another individual a 9,000-year lease on a business absolutely blew my mind. If you look closely at that image above you can see the lease’s rider, and that’ll give you an indication of why the lease might’ve been so favorable. All of the equipment included in the lease was basically in complete disrepair.

Arthur Guinness was born in Kildare, Ireland and was given an inheritance of £100 by his godfather, Arthur Price, in his will. Arthur Guinness used this money to launch his own business. He started with a brewery in Leixlip in 1755 where he brewed ale.

Within 10 years of launching his brewery, Arthur Guinness had given up on brewing ale and had moved onto brewing Porter.

Random Piece of Guinness Trivia #3: There Were More Breweries in Ireland during Arthur Guinness’ lifetime than there are now

Worldwide, on an average day, there is an average of 10 million Imperial Pints of Guinness sold every single day. On St. Patrick’s Day, that number jumps up to 14 million pints sold (on average). I would’ve guessed that the number of pints sold would’ve doubled to 20 million, but there’s a reason for this… 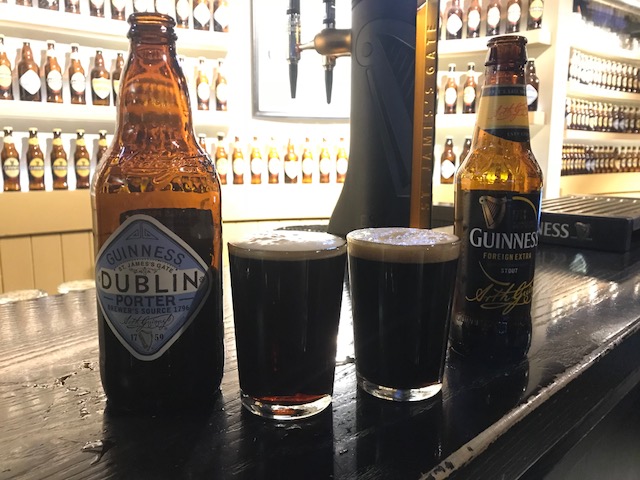 Random Piece of Guinness Trivia #5: the continent of Africa consumes 35% of all Guinness worldwide 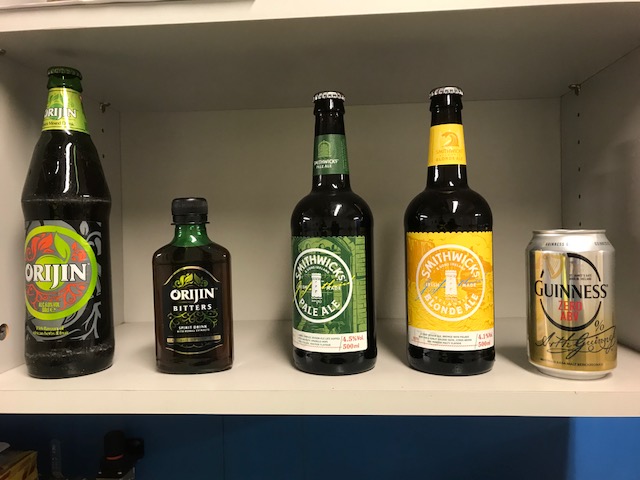 Across the continent of Africa, they love their Guinness. It’s a different beer than you or I drink, it’s the Guinness Foreign Extra Stout. Instead of using Nitrogen it’s a carbonated beer that’s bottled, just like most of the beers we get here in the states. I had a chance to drink this beer several times while at St. James Gate and the Open Gate Brewery and I have to admit that this is one of the best-tasting beers in the world. Globally, the U.K. is the #1 consumer of Guinness, the United States is #2, and the continent of Africa accounts for 35% of all Guinness sold. Part of the reason that only 4 million more pints of Guinness are sold on St. Patrick’s Day is because they don’t celebrate St. Patrick’s Day in African countries even though they consume massive quantities of Guinness. Above, you can see some other beers from Guinness which are sold exclusively on the continent of Africa. 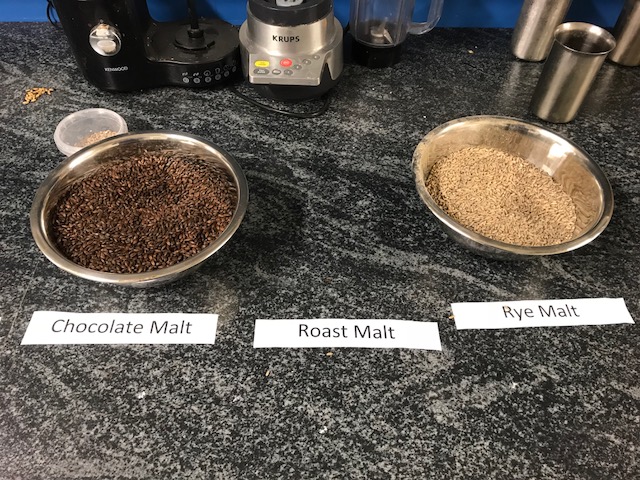 Everyone assumes that because Guinness is a dark beer (due to the brewing process) with a thick head of foam that it’s extremely heavy on calories. This is a complete misnomer. There are only 125-calories in a pint of Guinness. For comparison’s sake, there are approximately 450 calories in a bottle of Dogfish Head 120 Minute IPA. 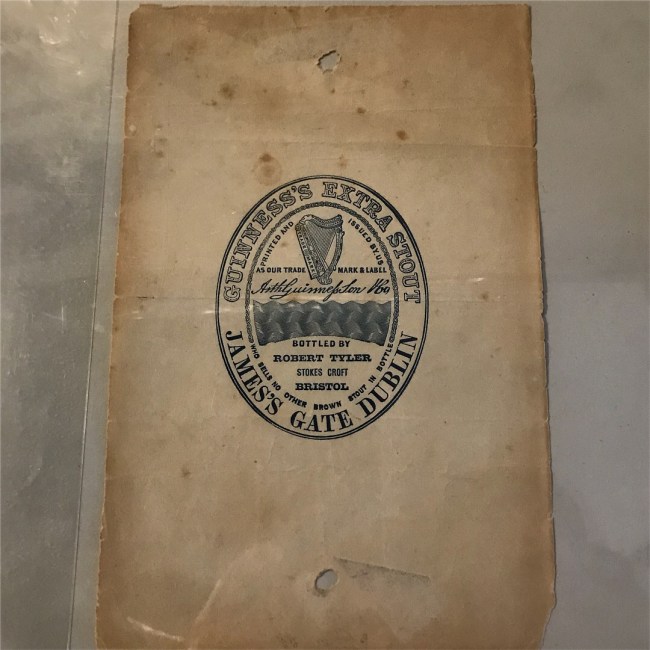 You can go anywhere in the world and recognize the Guinness label, and there’s a reason for that. The GUINNESS® livery and trademark consists of three pieces: the (1) harp, Arthur Guinness’ iconic (2) signature, and the word (3) Guinness. You can see all 3 of those pieces above in a copy of the original Guinness Trademark from 1876. I was able to get a look at this trademark when meeting with the Guinness archivist. Every bottle, can, pint, or label of Guinness sold worldwide has to include those three elements.

In the early 1900’s, pubs would bottle their own Guinness and print their own labels. They would have to send an application to Guinness with their label for approval. These lables didn’t need to include the Harp and Arthur Guinness’ signature but they did need to have the name GUINNESS on them. Guinness actually enacted some of the world’s very first quality-control programs because of this. They’d send employees all across the country of Ireland to spy on pubs to make sure that they were abiding by the three necessary elements of the trademark. If a pub was caught using a label that wasn’t approved they’d actually have to take out an apology of shame in the local newspaper. Below, you can see an instance of where a pub got caught using a label which wasn’t approved because it fails to use the word ‘GUINNESS’ and instead has ‘Genuine’ extra stout. 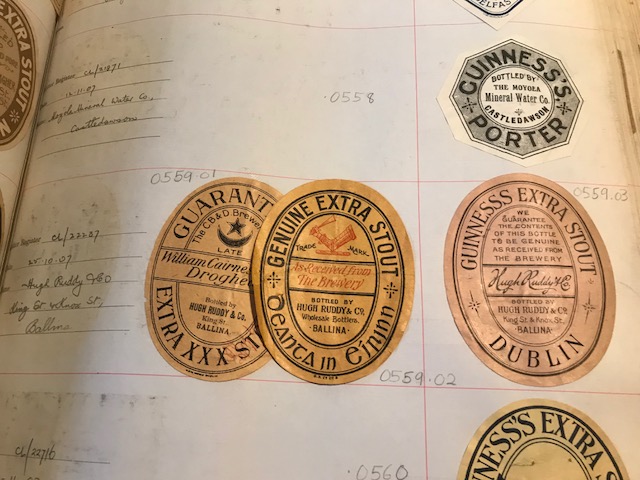 Random Piece of Guinness Trivia #7: you can see the Guinness Harp in person today 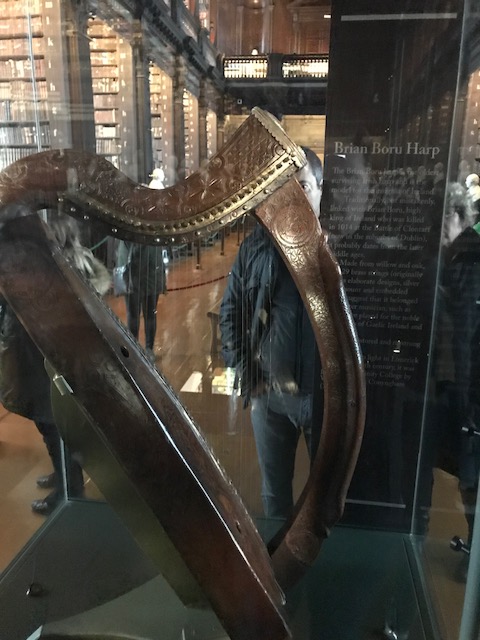 The iconic Guinness Harp is one of three elements found on every Guinness label. This harp is based on the 14th century “O’Neill” or “Brian Boru” harp which is the oldest surviving harp in the country of Ireland. You can see this harp on display in the Trinity College library in Dublin, just a 30-minute walk from the brewery. That library is also home to the world-famous Book of Kells.

Random Piece of Guinness Trivia #8: Arthur Guinness was as prolific of a family man as he was a brewer

Get this: Arthur Guinness had TWENTY ONE children, all with the same woman. He lived to the ripe old age of 77 and had 21 kids with wife Olivia Whitmore. I can’t imagine even having one child let alone 21. Just let that sink in for a while. 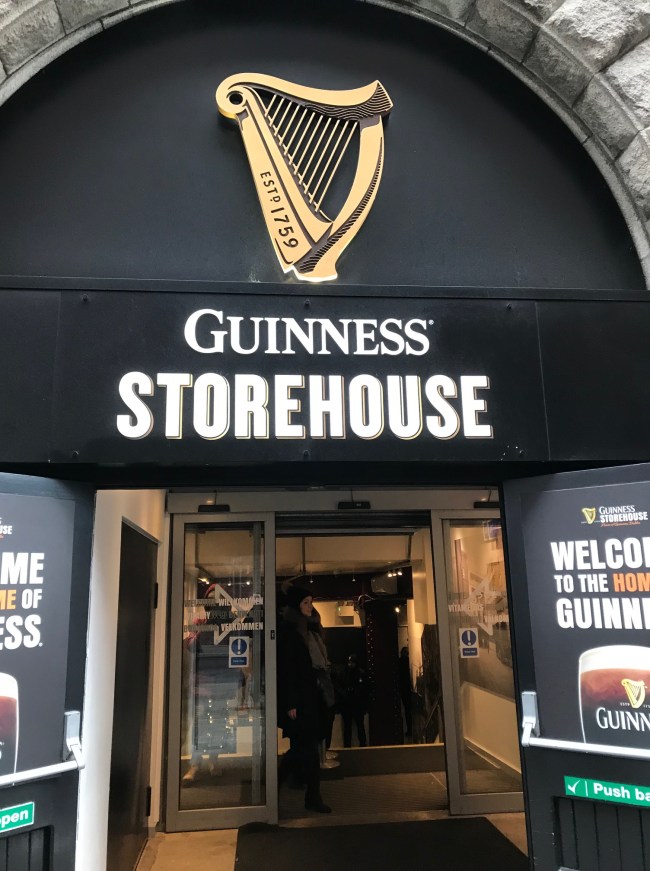 It’s estimated that 1.5 million people visit the Guinness Storehouse at St. James Gate each year. Over 25% of all visitors from Great Britain who visit Dublin take a tour at the Storehouse, and 22% of all Americans who come to Dublin visit the Storehouse. Each tour ends with a free pint at the Gravity Bar which WITHOUT QUESTION has the best view in all of Dublin. It’s a 360-degree floor-to-ceiling glass window bar which gives you panoramic views of Dublin and the surrounding countryside as far as the eyes can see.

Random Piece of Guinness Trivia #10: Guinness is black because of roasted malted barley

Certified master pint pourer with @guinnessus. Never too early for a pint.

Most people don’t know why Guinness is so dark. The blackness of the beer primarily comes from the use of roasted malted barley during the brewing process. This isn’t too dissimilar from the roasting of coffee beans when making coffee.

Random Piece of Guinness Trivia #11: Worldwide there are over 20 types of Guinness 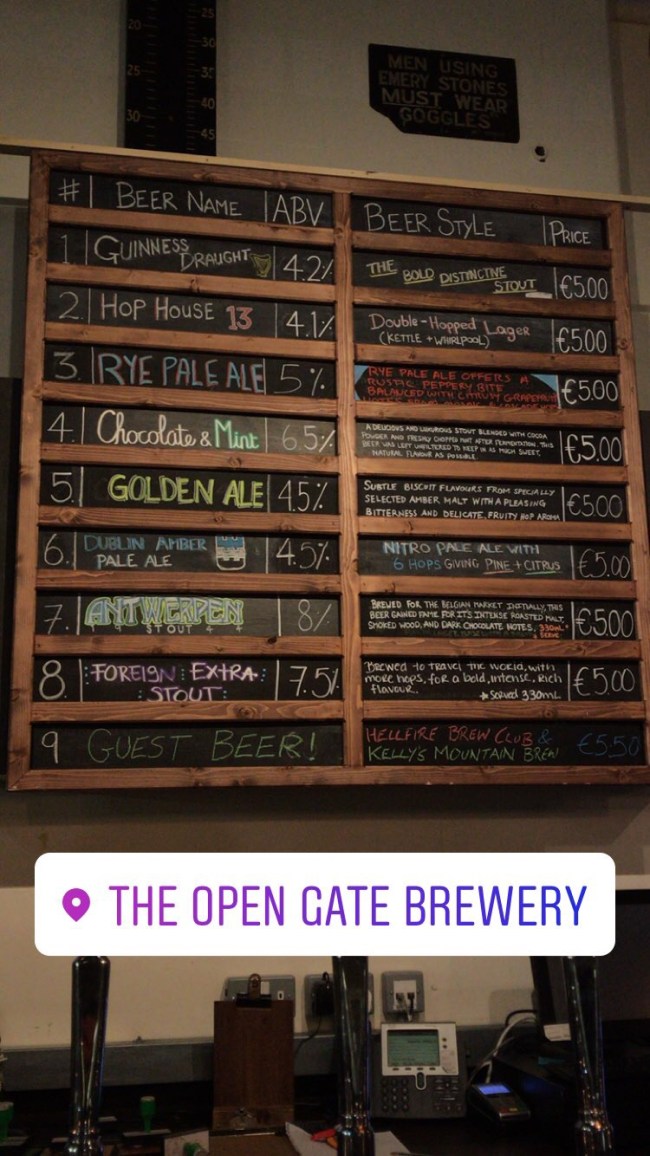 When I think of Guinness I think of the Stout that’s sold at every pub in America, the UK, and Ireland. The nitro stout. But there are over 20 types of Guinness sold worldwide on a regular basis. Going even further, at the Open Gate Brewery which is located adjacent to St. James Gate you can taste some small batch and experimental Guinness beers. I was able to sample a Mint and Chocolate Stout. This wasn’t your typical ‘Mint Chocolate Chip’ type flavor that you’d get with ice cream. This was a beer brewed with real Irish Mint leaves that had a rich and complex flavor.

This Milk Stout was another favorite of mine:

Check out our Instagram Live story for all of our #Dublin shenanigans with @guinnessus.

If you ever find your way to Dublin you 100% need to add the Open Gate Brewery to your list of to-do’s because you’ll be able to sample Guinness beers there which you cannot find anywhere else in the world, and this brewery has only been open to the public for a relatively short period of time.

Well, to the few of you still reading this I’ll spare you the monotony of reading more random Guinness trivia and leave you with these two short videos. I saved these from the BroBible Instagram Story and they detail my time in Dublin with Guinness hour by hour:

If you want to ensure you’re in the know and aware of the latest and greatest from Guinness make sure you go follow @GuinnessUS on Twitter and on Instagram for beer announcements!

***I should disclose that I was a guest of Guinness in Dublin and that’s what enabled me to take this trip and experience the history. I was not paid for this article, I’m just a big fan of Guinness.***